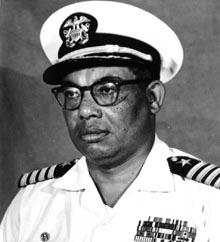 Samuel L. Gravely, Jr. was the first African-American officer to become an admiral in the United States Navy. During his 38 years in the military, Gravely distinguished himself as a naval communications expert, war and peacetime ship captain.

Gravely was on June 4, 1922, in Richmond, Virginia, to Mary and Samuel L. Gravely, Sr. After high school, Gravely attended Virginia Union University, but left to join the Naval Reserve in 1942.

After receiving basic training at Naval Station Great Lakes, Illinois, Gravely entered the V-12 Navy College Training Program at the University of California, Los Angeles. After graduating from UCLA, he completed Midshipmen’s School at Columbia University and was commissioned an ensign on November 14, 1944. His commission came only eight months after the “Golden Thirteen” became the first African-American officers in the U.S. Navy.

Gravely career began with him being the only black officer aboard the submarine chaser USS PC-1264, which was one of two U.S. Navy ships (the other being USS Mason (DE-529)) with a predominantly black enlisted crew. Before June 1, 1942, African-Americans could only enlist in the Navy as mess men; PC-1264 and Mason were intended to test the ability of blacks to perform general Navy service.