The Ole Miss riot of 1962, or Battle of Oxford, was fought between Southern segregationist civilians and federal and state forces beginning the night of September 30, 1962. Segregationists were protesting the enrollment of James Meredith, a black US military veteran, at the University of Mississippi (known as Ole Miss) at Oxford, Mississippi. Two civilians were killed during the night, including a French journalist, and over 300 people were injured, including one third of the US Marshals deployed.

In 1954 the US Supreme Court had ruled in Brown v. Board of Education that segregation in public schools was unconstitutional. Meredith applied as a legitimate student with strong experience as an Air Force veteran and good grades in completed coursework at Jackson State University. Despite this, his entrance was barred first by university officials, and later by segregationist Governor Ross Barnett who nominated himself as registrar and, on September 13, said on television.

In late September, 1962, the administration of President John F. Kennedy had extensive discussions with Governor Barnett and his staff about protecting Meredith, but Barnett publicly vowed to keep the university segregated. The President and Attorney General Robert F. Kennedy wanted to avoid bringing in federal forces for several reasons.

Governor Barnett, under pressure from the courts, conducted secret back door discussions in response to calls from the Kennedy administration between Thursday September 27 and Sunday the 30th.

On October 1, 1962, Meredith became the first African-American student to be enrolled at the University of Mississippi, and attended his first class, in American History. Meredith graduated from the university on August 18, 1963 with a degree in political science. At that time, there were still hundreds of troops guarding him 24 hours a day although, in order to appease the local sensitivities, 4,000 Black soldiers were removed from the Federal troops under Robert Kennedy’s secret order. 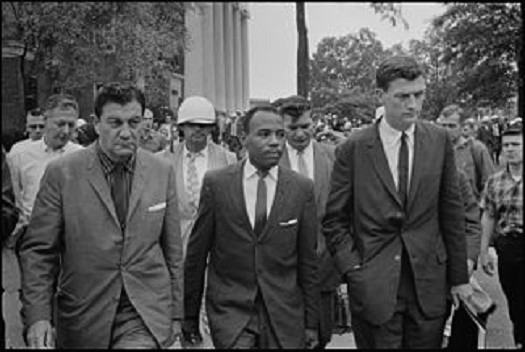