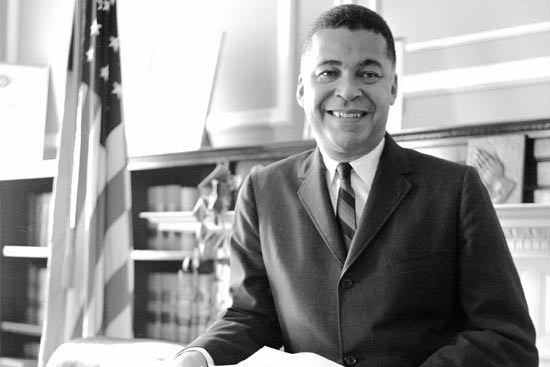 Edward William Brooke III was an American Republican politician. In 1966, he became the first African American popularly elected to the United States Senate. He represented Massachusetts in the Senate from 1967 to 1979.

Brooke was born on October 26, 1919 and raised in Washington, D.C.. He graduated from the Boston University School of Law after serving in the United States Army during World War II. After serving as chairman of the Finance Commission of Boston, Brooke won election as Massachusetts Attorney General in 1962. In 1966, he defeated Democratic Governor Endicott Peabody in a landslide to win election to the Senate.

In the Senate, Brooke aligned with the liberal faction of Republicans. He co-wrote the Civil Rights Act of 1968, which prohibits housing discrimination. Brooke became a prominent critic of President Richard Nixon and was the first Senate Republican to call for Nixon’s resignation in light of the Watergate scandal.

Brooke went through a divorce late in his second term in Senate. His finances were investigated by the Senate, and John Kerry, then a prosecutor in Middlesex County, announced an investigation into statements Brooke made in the divorce case. Prosecutors eventually determined that Brooke had made false statements about his finances during the divorce, and that they were pertinent, but not material enough to have affected the outcome. Brooke was not charged with a crime, but the negative publicity cost him some support in his reelection campaign, and he lost to Paul Tsonga. After leaving the Senate, Brooke practiced law in Washington, D.C. and was affiliated with various businesses and non-profits.

Brooke was diagnosed with breast cancer in September 2002, he assumed a national role in raising awareness of the disease among men.
On June 23, 2004, President George W. Bush awarded him the Presidential Medal of Freedom. That same year he received the Jeremy Nicholson Negro Achievement Award, acknowledging his outstanding contributions to the African-American community.

Two days after his 90th birthday, Brooke was presented with the Congressional Gold Medal on October 28, 2009. On January 3, 2015, Brooke died at his home in Coral Gables, Florida, at the age of 95.