Henry J. Richardson, Jr., was also instrumental in amending the state constitution to allow integration of the National Guard and he helped end racial discrimination at Indiana University, which had prohibited blacks from living in campus dormitories.

Richardson was born June 21, 1902, in Huntsville, Alabama. At the age of seventeen, he left for Indianapolis in pursuit of a better education. He attended Shortridge High School while living at the YMCA and waiting tables to support himself.
After graduating in 1921, he studied at the University of Illinois for two years on a scholarship. He then returned to Indianapolis to attend the Indiana University School of Law, earning his LL.B. in 1928. After completing his studies, he decided to get involved in politics.

In 1930, he was appointed a temporary judge in Marion County Superior Court. Two years later, he was elected as a state representative, becoming—along with Robert Stanton—the first of two blacks to sit with the General Assembly in thirty-five years. As a three-term legislator, he authored the first fair employment practices law in the United States. The measure prohibited state or municipal corporations from discriminating in contracting for public works projects.

Richardson was also instrumental in amending the state constitution to allow integration of the National Guard and he helped end racial discrimination at Indiana University, which had prohibited blacks from living in campus dormitories.
In 1934, Richardson, along with six other legislators, cosponsored a bill to “prohibit discrimination and intimidation on account of race or color” in all public accommodations. Richardson challenged his colleagues to “put teeth” into the state’s existing civil rights law, a measure enacted in 1885 but largely emasculated by the courts in succeeding years. The denial of rights protected under the law, he declared, was “unconstitutional, un-Christian and anti-social.”

In 1953, he worked with Thurgood Marshall to win an important case for integrated housing in Evansville. In addition to serving as legal counsel for the NAACP, he helped organize the Indianapolis Urban League in 1965 and worked for the Federal Civil Rights Commission from 1964 to 1968. His was a board member of the Indianapolis Church Federation, supported the local YMCA, and served on the Mayor’s Advisory Council and the Greater Indianapolis Progress Committee. Richardson died in Indianapolis on December 5, 1983. 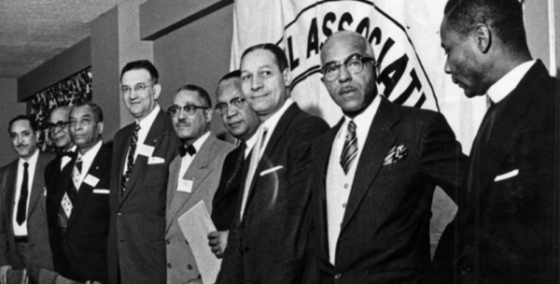