Oscar “Papa” Celestine: Founder of “The Original Tuxedo Orchestra” in 1910 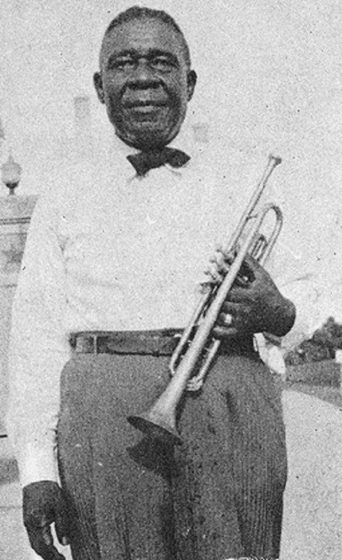 Oscar “Papa” Celestine was born in Napoleonville. While a young man he moved to Algiers and played cornet with the Algiers Brass Band and Henry “Red” Allen’s Excelsior Brass Band. Later he formed his own band, The Original Tuxedo Orchestra in 1910 and the Tuxedo Brass Band in 1911. One of the cornet players in Papa Celestine’s Brass Band was Louis “Satchmo” Armstrong. Celestine’s band was known for playing wherever jazz music was needed–funerals, picnics, or dances. In 1953, the band played for the President of the United States.

Celestine was born in Napoleonville, Louisiana, to a Creole family, son of a sugar-cane cutter. In his youth he worked on rural Louisiana plantations. Eager for a better life, he worked as a cook for the Texas & Pacific Railroad, saved up money and bought used musical instruments. He played guitar and trombone before deciding on cornet as his main instrument. He took music lessons from Claiborne Williams, who traveled down the Bayou Lafourche from Donaldsonville.

In 1932 Celestine was forced out of the business by depression economics, working in a shipyard until he got another band together after the World War II. The new Tuxedo Brass Band proved tremendously popular and was hailed as a key New Orleans tourist attraction.

In 1953, Papa Celestine appeared leading his band in the big-budget travelogue Cinerama Holiday, he also gave a command performance for President Eisenhower at the White House. His last recording was singing on, “Marie LaVeau” (1954). His band became a regular feature at the Paddock Lounge on Bourbon Street in the French Quarter, and made regular radio broadcasts, television appearance, and more recordings. Celestine recorded for Okeh in 1925, then for Columbia for the rest of the decade. Oscar Celestine died December 15, 1954, he was 70.