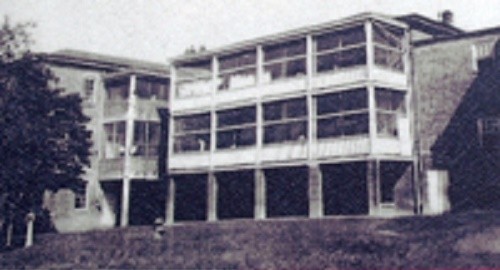 The Petersburg State Colony for the Negro Insane was chartered in 1938. The residential care facility housed African Americans males who had intellectual disabilities between the ages of eight and twenty-one.

The facility was located on the site of the now, Richard Bland College is located. A unit housing for 70 women was later added in 1941.
During the early parts of the 20th Century, the terms “idiot”, “imbecile,” and “moron” were commonly used legal definitions for the individuals with mental issues. Care for the intellectually disabled at this time was not directed at education, but at bare maintenance. There were no admission criteria, and young children were put in the facility right along with hardened criminals.

Around 1943, attitudes changed about the care for those who needed intellectual care. The idea of occupational education began to take hold, the Colony became a training school, similar to a boarding school. Criminals living at the institution were discharged, and the atmosphere improved. The facility was renamed “Evergreen” because of its beautiful greenery setting. In 1967, the facility was integrated, and in 1971 the facility received an influx of clients with intellectual conditions. This was the result of a legislative decision to separate persons with intellectual disabilities from those who were mentally ill. At this time the name was changed again to the Petersburg Training School and Hospital.

When the services and facilities were expanded in 1975, the facility was renamed the Southside Virginia Training Center for the Mentally Retarded. The Training Center was then one of five regional centers in the state to provide health, habitation and educational services for those eligible.