On Sunday, 20th June, 1943, one of the most serious race riots in the U.S. history broke out in the City of Detroit, Michigan. Before the riot could be brought to an end, about 36 hours later, 25 African-Americans and 9 Whites had been killed, and properties worth hundreds of thousands of U.S. dollars had been destroyed. 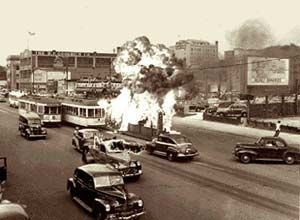 The 1943 Detroit race riot took place in Detroit, Michigan, in the U.S., from the evening of 20th June, through the early morning of 22nd June. The riot was suppressed by the use of 6,000 Federal troops. It occurred in a period of dramatic population increase and social tensions associated with the military buildup of World War II, as Detroit’s auto industry was converted to the war effort. Existing social tensions and housing shortages were aggravated by the arrival of nearly 400,000 migrants, both African-American and European-American, from the Southeastern U.S. between 1941 and 1943. The new migrants competed for space and jobs, as well as against white European immigrants and their descendants.

The Detroit riot was one of three that summer; it followed one in Beaumont, Texas, earlier that month, in which white shipyard workers attacked the blacks after a rumor that a white woman had been raped. It preceded a riot in Harlem, New York, where blacks attacked white-owned property in their neighborhood after rumors that a white policeman had killed a black soldier. In this wartime period, there were also racial riots in Los Angeles, California, and Mobile, Alabama.

The rioting in Detroit began among youths at Belle Isle Park on 20th June, 1943. The unrest moved into the city and was intensified by false rumors of racial attacks in both the black and white communities. It continued until 22nd June. It was suppressed after 6,000 federal troops were ordered into the city to restore peace. A total of 34 people were killed, 25 of them were African-Americans and most at the hands of white police or National Guardsmen. 433 people were wounded, 75% of them were blacks; and property valued at $2 million (currently, $27.5 million U.S. dollars) was destroyed. Most of the destructions occurred in the black area of Paradise Valley, which the poorest neighborhood of the city.

At the time, white commissions attributed the riot to the black hoodlums and youths. However, the NAACP identified the deeper causes as: the shortage of affordable housing, lack of minority representation in the police, discrimination in employment, and white police brutality. A late 20th-century analysis of the rioters showed that the white rioters were younger and often unemployed. This was a characteristic that the riot commissions had earlier falsely attributed to the blacks, despite the evidence before them. If working, the whites often held semi-skilled or skilled positions. They traveled long distances across the city to join the first-stage of the riot near the bridge and later traveled in armed groups explicitly to attack the black neighborhood. The black rioters were often older, established city residents, who in many cases had lived in the city for more than a decade or two. Many were married working men, and many were defending their homes and neighborhood against police and white rioters.