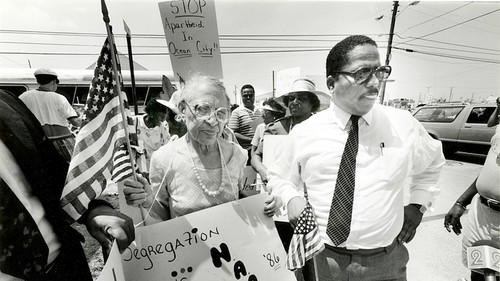 Enolia P. McMillan, the first female president of the NAACP and an educator whose career spanned 42 years. McMillan, whose father was born a slave, became a teacher in 1927 and quickly became a crusader for equal pay for black teachers and better schools for black students.

McMillan was born” Enolia Virginia Pettigen’ in Willow Grove, Pennsylvania, the daughter of Elizabeth Fortune Pettigen and John Pettigen, a former slave. The family moved to Maryland in search of improved educational opportunities when she was eight. She attended Frederick Douglass High School in Baltimore, Maryland and later Howard University in Washington, D.C. with the help of a scholarship from Alpha Kappa Alpha and graduated with a Bachelor of Arts in education in 1926.

She became a teacher in 1927 in Caroline County, Maryland teaching at Denton High School. In 1928, she became a principal in Charles County. McMillan received a master’s degree in 1933 from Columbia University.

After the 1954 Brown v. Board of Education ruling outlawing segregated public schools, McMillan was one of the first Black teachers at a White school.

She retired from teaching in 1968. In 1969, she defeated Juanita Mitchell, becoming president of the Baltimore Branch of the NAACP. During her presidency, the National Office was threatened with bankruptcy through legal proceedings against it in connection with a 1966 boycott of white merchants in Port Gibson, Mississippi in 1976. McMillan launched a fundraising drive to help defray expenses and her efforts resulted in the Baltimore Branch raising the largest local contribution of $150,000.

In 1984, she became the first elected woman national president of the NAACP and held the position until 1990. The role at the time was largely ceremonial, but McMillian had considerable influence in the organization’s policies and operations. Along with former NAACP Executive Director Benjamin Hooks, she is credited with organizing the organization’s move from New York to Baltimore in 1986.

She was an outspoken critic of the Reagan administration which she felt harmed the NAACP’s advocacy efforts in housing, education, employment and business. During her tenure, she also helped Black businesses to receive federal contracts and in 1985 led a protest against the apartheid in Washington. Enolia McMillan died in 2006.

« Previous PostMiller May: Poet and Playwright of the Harlem Renaissance Next Post »February 3: The Negro Baseball Leagues Were Founded Today in 1920