Richard Henderson was born a slave in Maryland in 1801. He escaped slavery as a young boy and arrived in Meadville, PA around 1824. He found work as a barber and it was not long before he became active in the Underground Railroad. It is estimated that Henderson harbored as many as 500 runaway slaves prior to the Civil War in his Arch Street house.

Henderson was the first permanent black resident of Meadville. He escaped slavery at the age of 15 along with his two brothers and a sister. The brothers survived but the sister died due to pneumonia shortly after their journey. One of the brothers continued traveling to Canada, while Henderson and his other brothers set up a barbershop in town.

While his brother Robert eventually left to establish his own barbershop in nearby Brookville, Richard remained in Meadville. There, he was a leader in the local Underground Railroad network from the 1830s to the 1860s.

Richard Henderson was a prominent member of the African American community, where he helped to form Meadville’s Bethel A.M.E. Church in 1849 and served as an early trustee. He married twice. Henderson died in 1880 at the age of 79. 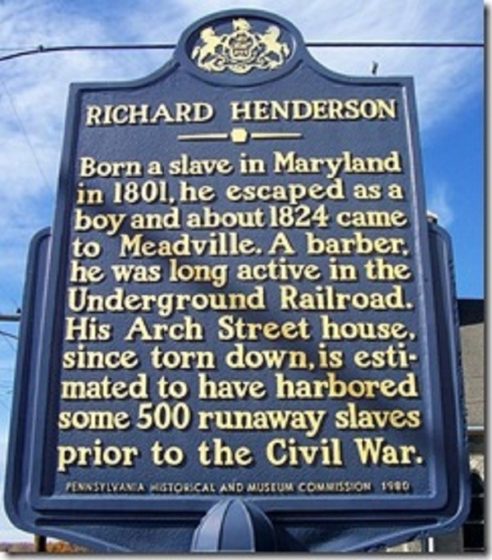 Richard Henderson
« Previous PostWhat Made James Brown "The Hardest Working Man In Show Business"? Next Post »From The Big House To The White House: How A Slave Girl Used Her Extraordinary Talent To Buy Her Freedom And Become the First Black Designer For The White House