From The Big House To The White House: How A Slave Girl Used Her Extraordinary Talent To Buy Her Freedom And Become the First Black Designer For The White House

What  is it about Ms. Elizabeth Keckley  that makes her so admirable? Her drive and accomplishments were extraordinary, indeed, for in February of 1818 in the state of Virginia, Keckley was born into slavery, and suffered as such for 38 years of her life. She honed her fabric craft and eventually bought her own freedom (and her son’s, George, who, sadly, died whilst fighting in the Civil War) from her St. Louis slaveowners for a sum of $1200.

With her business savvy and ability to network, Keckley was able to build a clientele that included the elite of Washington DC, who admired and desired her precise and elegant handiwork with fabric and needle. Soon after President Lincoln’s election in 1861, Mary Todd hired her to become her personal dressmaker.

A purple velvet skirt and bodice that belong to Mary Todd Lincoln, and that is attributed to Keckley. 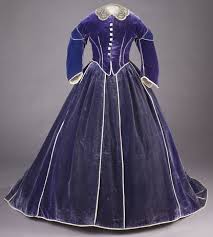 Unfortunately, there aren’t many known extant garments available, but with Keckley’s sophisticated style, certain gowns and outfits belonging to Mrs. Lincoln have been attributed to this talented woman.

In addition to her business acumen, design and sewing skills, in 1862, Ms. Keckley also instituted an organization known as the Contraband Relief Association, which provided necessities such as housing, food and medical attention to newly-freed slaves.  Overall, this remarkable woman’s perseverance, in addition to her aforementioned qualities, make her a woman of note not just in the world of fashion and design history, but in women’s history as well.