The Interesting Narrative Of Olaudah Equiano: A Captive Tell His Own Story 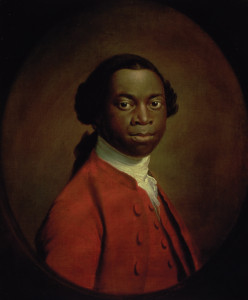 Captured far from the African coast when he was a boy of 11, Olaudah Equiano was sold into slavery, later acquired his freedom, and, in 1789, wrote his widely-read autobiography, The Interesting Narrative of the Life of Olaudah Equiano, or Gustavus Vassa, the African.

The youngest son of a village leader, Equiano was born among the Ibo people in the kingdom of Benin, along the Niger River. He was “the greatest favourite with [his] mother.” His family expected to follow in his father’s footsteps and become a chief, an elder, a judge. Slavery was an intregal part of the Ibo culture, as it was with many other African peoples. His family owned slaves, but there was also a continual threat of being abducted, of becoming someone else’s slave. This is what happened, one day, while Equiano and his sister were at home alone.

Two men and a woman captured the children. Several days later Equiano and his sister were separated. Equiano continued to travel farther and farther from home, day after day, month after month, exchanging masters along the way. Equiano’s early experiences as a slave were not all disagreeable; some families treated Equiano almost as a part of the family. The kind treatment, however, was about to end.

About six or seven months after being abducted, Equiano was brought to the coast, where he first encountered a slave ship and white men.

As it was for all slaves, the Middle Passage for Equiano was a long, arduous nightmare. In his autobiography he describes the inconceivable conditions of the slaves’ hold: the “shrieks of the women,” the “groans of the dying,” the floggings, the wish to commit suicide, how those who somehow managed to drown themselves were envied.

The ship finally arrived at Barbados, where buyers purchased most of the slaves. There was no buyer, however, for the young Equiano. Less than two weeks after his arrival, he was shipped off to the English colony of Virginia, where he was purchased and put to work. Less than a month later, he had a new master — Michael Henry Pascal, a lieutenant in the Royal Navy. Under this master, who owned Equiano for the next seven years, Equiano would move to England, educate himself, and travel the world on ships under Pascal’s command.

In 1766, Equiano bought his freedom. He found work in the trade business in the West Indies, then in London. In 1773, he took part in an expedition to try to discover the Northwest Passage, a route through the arctic to the Pacific Ocean.

Back in England, Equiano became an active abolitionist. He lectured against the cruelty of British slaveowners. He spoke out against the English slave trade. He worked to resettle freed slaves.

By 1789, the year he published his autobiography, Olaudah Equiano was a well-known abolitionist.

Ten years after his death in 1797, the English slave trade was finally abolished.

« Previous PostA Short Commentary on the Cultural Significance of the Word 'Hotep' Next Post »Is Mass Incarceration the New Jim Crow?