Around 1 p.m. on July 4th, 1892 a dispute occurred between a black teamster, Benjamin Reed, and a white shipping clerk, Frank Burrows. The two were co-workers at the Anheuser-Busch Brewing Association. Burrows, a young man in his mid-20s, reprimanded Reed, who was around 35, for delivering beer kegs late, which caused the plant to have to close late for the 4th of July celebrations. Workers reported hearing Reed respond to Burrows reprimand saying “Don’t treat me like a dog.”

Soon after, the two men were allegedly swinging pieces of wood at one another. Reed gave Burrows a lethal blow to the head that knocked him unconscious. He was pronounced dead that evening.

Reed was arrested and taken to the Jacksonville City Jail. Rumors began to circulate about the possible lynching of Reed even before Burrows had passed away. The all-too-familiar scenario could have played out in this case: angry white mob gathers, kidnaps black man accused of a crime, lynches the alleged criminal after the police fail to protect him, etc. However, that did not happen in this case.

A mob of approximately 100 black people gathered in downtown Jacksonville to protect Reed. The scene was described in the Florida Times-Union as:

“Every approach to the jail was guarded by crowds of negroes armed to the very teeth. The city was virtually under their control…Sentinels stood on every street corner, and when a white man would pass they would question him about where he was going, etc. A whistle signal would then be passed on to the next corner and the pedestrian would be surrounded and followed. If he went in the direction of the jail, the negroes would close in upon him and he would soon find himself covered by fifty or more cocked revolvers. He would be interrogated again and after being treated to the abusive language would then be ordered to go back.” 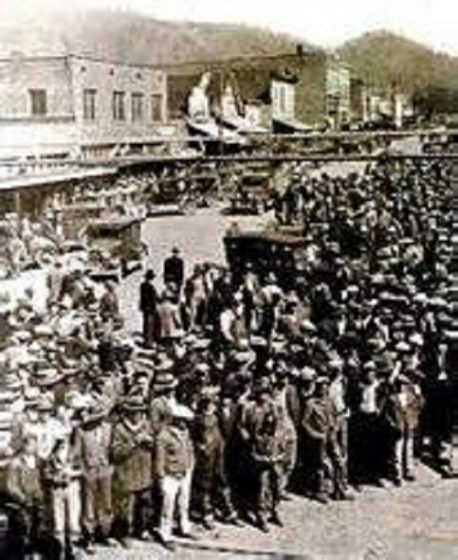 Within three days, the mob of angry black residents grew to an astonishing number of nearly 1,000. However, by this time, an equal amount of whites began pouring into the county as well. Many of the whites were coming from as far as Georgia.

Finally, on July 7th, with the help of a Gatling Gun aimed at the mob around the jail, a timely downpour of rain, and a great show of military uniforms in a parade down Bay Street, both the black and white crowds were finally disbursed without bloodshed.

Benjamin Reed was eventually tried and convicted of first degree murder in the death of Frank Burrows. He was sentenced to hard labor for life. He was admitted to prison on December 4, 1893.