The race riot of 1906 made international headlines and threatened Atlanta’s image as a thriving New South city. On September 22, 1906 newspapers reported alleged assaults on four white women by black men. After the report white angry men gather in the streets of Atlanta, Georgia with the intentions of attacking and killing every black man they found. The emergence during this time of a black elite in Atlanta also helped contribute to racial tensions in the city. As the black elite gained wealth, education, and prestige, its members attempted to distance themselves from an affiliation with the black working class, and especially from men with no jobs and frequented the saloons on Atlanta’s Decatur Street. The white people were against these saloons as well. 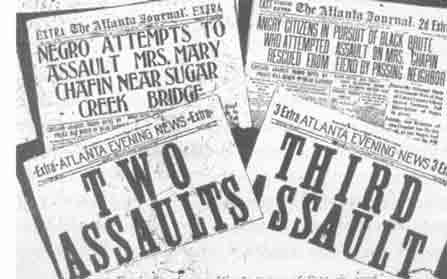 Atlanta’s Mayor at the time James Woodward, wanted to know what he could do to help the situation, the solution that the white mob wanted was to have the cause removed. As long as the black men were assaulting white women, so the mob believed there would be no rest for the city. Woodward’s inconsistency empowered the white mobs and the massacre continued. For a total of four days, black people were chased, beaten, shot, and hung throughout Atlanta and its surroundings. When black citizens of Brownville, a nearby suburb, attempted to arm themselves in defense, Georgia troops raided their homes, taking weapons and arresting those in possession of them. After four days of riots, between 25 and 40 people were dead and countless more were injured.