The Slave Experience During Christmas Time

How did American slaves celebrate Christmas? Though many belonged to wealthy families, they themselves were poor and shared only a small fraction of the families’ lavish festivities. Many slaveowners granted their slaves a day or more of rest at Christmas time. Some also provided them with gifts of food, including nice cuts of meat, which was rarely eaten during the rest of the year. Some owners also allowed their slaves to visit relatives who lived in different places. Slaves enjoyed these simple pleasures, activities that many slaveowners took for granted the year round.

On average, many slaveowners gave their slaves about three days off during the holidays; some slaves received an ample amount of relaxation time for Christmas, others received fewer days ago, if any at all. On some plantations, slaves were authorized to select a yule log to burn in the main fireplace of the manor house. Since the slaves’ holiday lasted as long as the log burned, naturally, they tried to pick what appeared to be a slow-burning log. This way, the Christmas holiday could possibly be extended until January.

Not every slave was able to relax at during the holidays. Many families hosted elaborate Christmas dinners and parties, so some household slaves had an increased workload at Christmas time. What’s more, slaves could not count on time off at Christmas, since the master could always cancel their holiday. Indeed, some slaveowners withheld the privilege of celebrating Christmas from slaves who had displeased them during the year.

Many plantation slaves spent the holidays by taking part in rituals in the slaves’ quarters. Some slaves took advantage of the time off to hold quilting bees. Other crafts were also made and sold at this time, as many slaves were able to keep all the money they earned during the holidays.  Some slaves may have also spent time pursuing an education, which was dangerous because many Southern states prohibited the education of slaves.

Some slaves never quite got enough to eat throughout the year. Choice cuts of meat, eggs, sugar, and butter were almost given to slaves on a typical day. Many owners gave their slaves more high-quality food during the holiday, which enabled them to feel not only satiated, but full of tasty food that their masters enjoyed. On some plantations, a large Christmas banquet was prepared by the masters for the slaves to enjoy.
Some of the meats enjoyed during the holidays included roast chicken, ham, squirrel, pigs’ feet, and possum. Side dishes might include squash, greens cooked with ham hocks, salad greens and eggs, or ashcakes (boiled cornmeal sweetened with molasses and wrapped in cabbage leaves to bake). For dessert some slaves baked a cake or made sweet potato pie.
Many of these Christmas meals included homemade wine or other liquor provided by the slaveowners. This often resulted in drunkenness, since slaves were not permitted to drink at any other time of the year. Frederick Douglass believed that many slaveowners promoted this to discourage slaves from pursuing freedom.

FAMILY VISITS AND MARRIAGES
Slavery tore many families apart. Sometimes, the slaveowners would split up married couples or sell children away from their parents. Nevertheless, some masters allowed their slaves to visit family members during the holidays.
On Christmas Eve, the master distributed passes, which gave certain slaves permission to visit relatives who lived nearby. Slaves welcomed the visitors, even if the guests weren’t related to themselves. Slaves looked forward to these visits during the entire year.
Christmas was a popular time for slaves to marry. The joyous family reunions and rowdy revelry that characterized the “Big Times,” as slaves sometimes referred to the Christmas holiday, inspired an increased number of romantic encounters leading to marriage.

GIFTS
Many masters also gave gifts to their slaves. In addition to necessities such as clothing and shoes, typical presents included hats, tobacco, sugar, bandanas, hair ribbons, and coins. Some wealthy masters also gave money to their slaves at Christmas time. Masters sometimes gave high quality food so the slaves could hold a banquet.
Plantation slaves, who rarely entered “the big house” the rest of the year, sometimes had to make a formal visit to the the manor in order to receive these gifts. They wore their best clothes for this gift giving tradition. Upon receiving their gifts, the slaves would extend Christmas greetings and good wishes to the master and his family. The slaves would then present the master or mistress with gift, such as a homemade basket. Sometimes, the owners would propose a toast with a glass of eggnog.

At some plantations, the slaves did not receive their gifts in the master’s manor. Instead, the owners visited the slaves’ quarters to present them with gifts. Sometimes the white folks joined the slaves and they sang, dance, and partook in their own holiday traditions.
On Christmas Day, custom permitted slaves to ask for a small gift from any white people they saw. All they had to do was say, “Christmas gift!” before the white person could talk to them. Slaveowners who considered themselves good-natured stocked up on coins, sweets, and other small gifts to give away during this ritual.
In spite of their poverty, slave parents often gave their children modest gifts, such as homemade baskets, hats, or quilts. 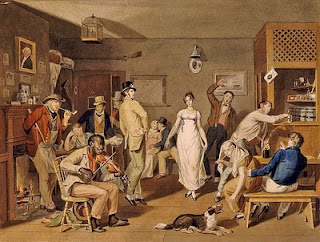 SONG AND DANCE
Temporarily relieved from their daily, often grueling routines, plantation slaves celebrated with music and dancing. Some records indicate that these Christmas celebrations lasted all night, from Christmas Eve through Christmas Day. Slave played music with any kind of instrument they could find, including homemade drums, pipes, fiddles, and banjos. Those who could not find or play musical instruments would sing and dance.

In some parts of the South, slaves practiced a Christmas masquerade known as Jonkonnu. Men dressed in makeshift costumes and masks and went from house to house playing music and dancing. Householders gave them coins or trinkets in exchange for the joyous entertainment.
Slaves also sang religious songs during this time, later known as “spirituals.” Some well-known spirituals include “Mary Had a Baby,” “Go Tell It on the Mountain,” “Rise up Shepherd and Follow,” “Sister Mary Had-a But One Child,” and “Behold That Star.”

RELIGION
Slaves attended religious services and gathered together to pray. Some slaves belonged to conservative Christian denominations which prohibited dancing, such as Baptist and Methodist churches. These people would avoid the festive Christmas celebrations and instead organize prayer meetings. Some of the meetings lasted for hours, others lasted all night.

RUNNING AWAY AND REBELLING
Christmas was a popular time of year to run away to seek freedom in the Northern states. Slaves reasoned that they were less likely to be missed or apprehended on the roads at Christmas time than at any other time of the year, since they would not be expected to show up for work until after the holiday. Furthermore, whites were accustomed to seeing many black people on the streets during the holiday season. The time off that was allotted to slaves during the holidays may have inspired a number of slave revolts, as approximately one third of both documented and rumored slave rebellions reportedly occurred around Christmas. In 1856, slave revolts occurred in nearly every slaveholding state at Christmas time.
CHRISTMAS LEGENDS, LORE, AND SUPERSTITION
Throughout the South, both white and black children were told that Gabriel the Angel sprinkled stardust on the earth in early winter to explain the first frost of the season. Its sparkling beauty served to remind children of the birth of Christ.
Slaves also passed along bits of old European Christmas lore, such as the belief that animals could talk on Christmas Eve. If one crept quietly into the barn at just the right moment, one might overhear the animals whispering praises to God and the baby Jesus.
Source: The Pardu’s Scroll
ChristmasChristmas and slavery
« Previous PostJohnkankus, The Forgotten Holiday Tradition Of The African American Christmas Brought Over From African During Slavery Next Post »Happy Birthday To Legendary Actress, Ms. Cicely Tyson!