On December 11, 1964, in response to a reported shooting, officers of the Los Angeles Police Department were dispatched to the Hacienda Motel, where they found Sam Cooke dead on the office floor, shot three times in the chest by the motel’s manager, Bertha Franklin. The authorities ruled Cooke’s death a case of justifiable homicide, based on the testimony of Ms. Franklin, who claimed that Cooke had threatened her life after attempting to rape a young woman with whom he had earlier checked in. 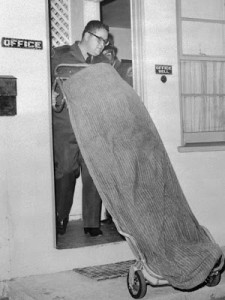 Even as the lurid details of the case were becoming common knowledge, some 200,000 fans turned out in the streets of Los Angeles and Chicago to mourn the passing of Sam Cooke, a man whose legacy seemed able to transcend the scandal surrounding his death. That legacy was built during a brief but spectacular run as a singer, songwriter, producer and music publisher in the 1950s and early 1960s. 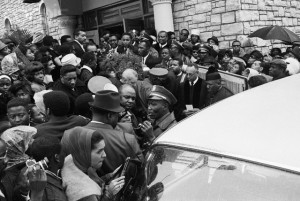 Born in 1931 to a Baptist minister and his wife, Cooke’s early musical development took place in the church. Like other early figures in what would eventually be called “soul” music, Cooke began his professional career singing gospel. A member of the legendary Soul Stirrers since the age of 19, Cooke was given permission by his record label to begin recording secular music in 1956.

“You Send Me” (1957) was Sam Cooke’s first pop smash, and it was followed by such classics as “Chain Gang” (1960), “Cupid” (1961), “Twistin’ the Night Away” (1962) and the Dylan-inspired posthumous release that became an anthem of the Civil Rights Movement: “A Change Is Gonna Come” (1964). His voice has been called the most important in the history of soul music, but just as important to Sam Cooke’s historical standing is the fact that he also wrote all of the aforementioned hits—a remarkable fact for any popular singer of his time.

In the years since his death, the circumstances surrounding Cooke’s shooting have been called into question by his family and others. Though the truth of what happened on this day in 1964 might remain uncertain, Sam Cooke’s place in the history of popular music is anything but.