Minstrel Shows and Their Meaning: Why Blackface Costumes ARE NOT Okay

What did the entertainment look like in the 19th century? With slavery booming, racism was at the forefront of society and the gap in racial segregation was still open wide. Entertainment came from the traveling circus, theater troupes, ventriloquists, poets, comedians, and orchestras. In 1808, The Minstrel Shows were fathered. Thomas Dartmouth Rice, a man known as the “father of American minstrelsy,” began these shows where he incorporated a diversity of acts which were already traditions in entertainment at the time. He took the traveling circus, medicine shows, shivaree, Irish dance, and music with African syncopated rhythms, musicals halls, and traveling theater and turned them into a thriving show. 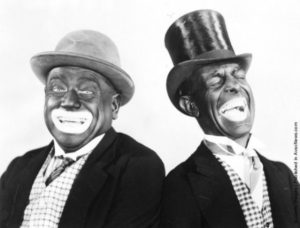 In the New York theater in 1828, “Daddy” Rice performed a routine in blackface and tattered clothes. Rice was a white man, who painted his face black to resemble an African American, and he embodied the persona of a folk trickster named Jim Crow; Jim Crow was popular among the slaves, so they knew the name well. Rice’s show became an instant sensation and grew in the US and England like wildfire.

As the years went on, The Minstrel Shows grew in fame and fortune, and imitators began to surface. In 1842 a songwriter, Daniel Decatur Emmett, and his three companions came up with a routine where they sang and danced in blackface and costumes. They performed with bone castanets, fiddle, banjo, and tambourine. They went by the name ‘”The Virginia Minstrels.” The Minstrel shows quickly became one of the central events in the culture of the Democratic party.

White performers would blacken their faces with burnt cork or greasepaint, and dress in eccentric costumes, and perform songs and acts that mocked African Americans. The Minstrel shows were the opposing show to the “Cake Walk.” The cake walks were performed inside slave plantations, where the slaves would get dressed up and mock the mannerisms of their white masters and be judged with the aim of, ultimately, winning an elaborately decorated cake. But the sole purpose of these performances was to entertain, whereas the mockery of Blacks just happened to be part of the satisfaction.

Blackface costumes are tasteless and intolerable. Some people would suggest the lateral comparison between the humor in the minstrel shows and the cake walks. But the considerable difference is in the fact that when one paints their face black, enrobes themselves in torn rags, and pretends to understand what it must have been like to have been a slave, they’re putting on the face of ignorance. Unless they’re a survivor of slavery and everything it represented, there is no way they could even begin to understand the value in being black. This gesture as today’s propaganda is demoralizing and disrespectful; the humor has been long since removed, that is, if it was even ever there.

Read more of the original story via: http://black-face.com/minstrel-shows.htm and https://chnm.gmu.edu/courses/jackson/minstrel/minstrel.html

« Previous PostSolomon Moseby: Falsely Accused of Theft in Order to Be Extradited Back into Slavery Next Post »March 1: Undefeated Joe Louis Retired From Boxing on This Date in 1949