The life of former slave turned boxer Tom Molineaux was short and violent. Born on a Virginia plantation during the early 1780s, the story of his early life really depends on the source. One account mentions that he simply arrived in England one day, an incredibly vague origin. Building onto to this one, it has been noted that he arrived in England while serving an ambassador. Another states that Molineaux began his career in bare-knuckle boxing after defeating several other slaves for the entertainment of his master and others. This fight gained him $500 and his freedom. 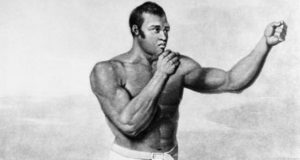 While some of those stories might have some truth to them, what is known is that Tom Molineaux arrived in London in 1809. Here, he would contact fellow former slave, bare-knuckle boxer, and bar owner Bill Richmond. Through his connections, Richmond scheduled Molineaux for a fight in July 1810. The fight went on for 65 minutes before Molineaux emerged victorious.

He would knock out Tom Blake the following month following eight rounds of action. That December, Tom Molineaux would get his first match for a title taking on English Champion Tom Cribb. The champion was expected to take the match pretty quickly but it would go thirty-five rounds and wasn’t without controversy and disturbance from the crowd. Cribb won the match after Molineaux, who injured his hand in the 19th round was too hurt to be effective.

Molineaux was in action by May 1811, defeating a William Rimmer in twenty-one rounds. His rematch against Tom Cribb was that September and featured a much larger crowd than their first bout. Eleven rounds in, Molineaux was knocked out and left with a broken jaw. This would be the last fight where Bill Richmond managed him.

His final four matches were well in his favor–including two matches in Scotland. Molineaux’s final match in March 1815 ended in defeat. While he continued to earn a living in exhibition matches, alcoholism got the better of him. On August 4, 1818, he died with nothing to his name at the age of 34-years old.