By 1921, Tulsa was booming thanks to the discovery of oil, and many African Americans had also prospered. Most black people lived in the racially segregated “Greenwood” section of the city, which contained stores, shops, hotels, banks, newspapers, schools, theaters, and restaurants. Greenwood had several wealthy black entrepreneurs and was sometimes called the “Black Wall Street” of America.

By 1921, membership in the Ku Klux Klan was rapidly spreading throughout America and an active chapter had been formed in Tulsa. The riot was triggered over a Memorial Day weekend by a report in two white newspapers that a black youth had tried to rape — or at least assault — a young white woman elevator operator. One of the newspapers allegedly editorialized that the youth ought to be hanged. Rumors raced through the black community that a lynch mob was planning to hang the youth.

A group of armed African-American men rushed to the police station with the intention of preventing a lynching from occurring. There was no lynch mob but a confrontation developed between blacks and whites; shots were fired and some whites were killed. As the news spread throughout the city, mob violence exploded. Thousands of whites rampaged through the black community, killing men 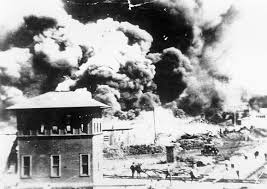 and women, burning and looting stores and homes. Some blacks claimed that policemen had joined the mob; others claimed that a machine gun was fired into the black community and a plane dropped sticks of dynamite. When the National Guard arrived, it arrested blacks rather than white rioters. Some four thousand to five thousand men and women were held in custody for several days before being released. No whites were arrested even though many of the mob members openly boasted of what they did. Thirty-five blocks of Greenwood were burned to the ground, wiping out businesses in the black district of Tulsa, and the genesis of the riot that decimated this section of town. 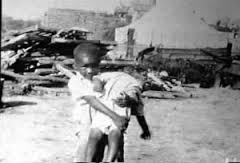 Reports of the number of blacks killed ranged from 25 to 300. Approximately 20 whites were killed.

Despite promises to help, the city did not support those who lost their homes and jobs despite claims for over 1.5 million dollars in damage. Most support came from the black community and a few sympathetic whites. Only in recent years has white Oklahoma begun to accept any responsibility for what happened.