Wade Thomas: Game of Craps Lead to Death of Police Officer and Lynching

Wade Thomas, who also went by the name “Boll Weevil,” was a native of Jonesboro County, Arkansas. According to the Arkansas Gazette, he was known as a “bad and impudent negro” who had formerly served time in the Arkansas penitentiary for highway robbery. According to Jonesboro historian Lee A. Dew, Thomas made his living by playing craps and engaging in petty thievery.

On Christmas night 1920, Thomas was armed with a pistol and was playing a game of craps with his neighborhood black friends. Police officer Elmer “Snookums” Ragland raided the game, and shots were fired. Ragland was killed and Thomas was injured.

Thomas escaped into the next county, which was 23 miles away. Officers in the town arrested a black man, but it turned out that he was the wrong person. However, Thomas was recognized when he was trying to board the train. He was arrested, taken into custody, and returned to Jonesboro.

The citizens of Jonesboro learned of these events on December 26, which was a Sunday. Groups of people huddled in grim conversations outside the doors of the churches and throughout the town. Tension gripped the town as more and more people began to spread rumors and their own versions of what had taken place. 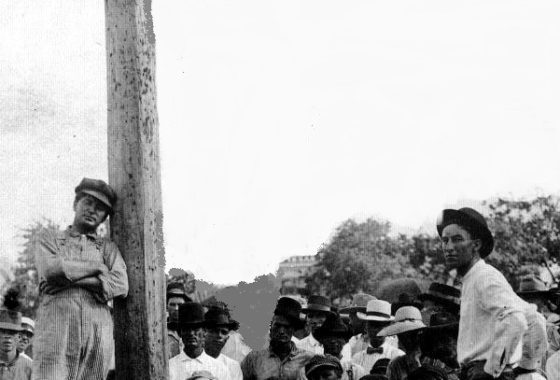 The mayor and sheriff became worried that the crowd would get out of control. In an attempt to defuse the situation, they called a coroner’s jury, which indicted Thomas for murder. Allegedly, Thomas confessed to killing Policeman Ragland, but claimed that he did not shoot until after he had been wounded twice. Thomas’ companions of the night — Monroe Young, Banks Duncan, and George Clark — were also charged as accessories, along with Draper Chatman, John Conway, and Oscar Johnson as material witnesses. All of the men were thrown in jail to await trial.

However, an angry mob stormed the court and told the judge to leave unless he wanted to witness the lynching. After Thomas was taken from his jail cell, a noose was draped around his neck and he was led to a telephone pole. It was reported that during that time, the mob was orderly while transporting Thomas.  Thomas was lynched on December 26. The mob was later convinced to allow the law to handle Thomas’ friends who were awaiting trial in prison.