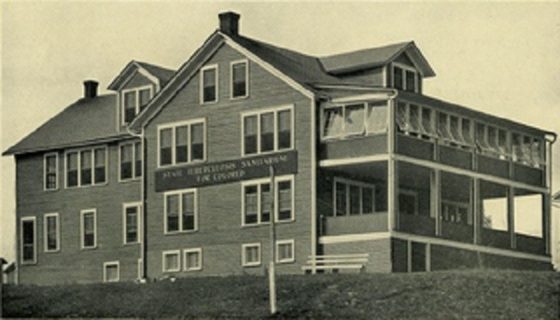 The early part of the twentieth century brought the deadly lung disease, tuberculosis to sections of West Virginia. The epidemic heavily hit the southern coalfields. Unsanitary conditions in coal towns as well as contaminated meat and dairy products was a huge problem and helped spread highly contagious disease. During this time, there were no facilities to treat black patients. Most white patients were sent out of state to be treated. However, most African Americans stricken with the disease did not have the means to travel out of state to be treated.

In 1913, the first tuberculosis sanitarium for white patients was opened in West Virginia. Four years later, on February 16, 1917, the legislature approved the establishment of a similar facility for African Americans. The West Virginia Board of Control purchased 185 acres of land and several buildings at Denmar in Pocahontas County from the Maryland Lumber Company. Both Hopemont and Denmar were chosen for their high altitudes, which were beneficial to those with lung diseases.

In January 1919, the West Virginia Colored Tuberculosis Sanitarium at Denmar admitted its first patients. Still, only Blacks who were able to pay for their own care were treated, this created hardships for numerous black families. Many patients arrived at the sanitariums by order of city or county governments, which were trying to contain the disease. The West Virginia Penitentiary also sent prisoners to the sanitariums to avoid infecting other inmates.

The number of black patients at Denmar grew quickly and forced the state to add dormitories and a school for  children. To alleviate overcrowding, the legislature funded a new building in 1937. As medical science developed more effectively, so did the means to diagnose and treat tuberculosis.

In 1957, the state converted Denmar to a hospital for the chronically ill and moved the remaining tuberculosis patients to the newly integrated Hopemont facility. In 1965, the Hopemont Sanitarium also became a hospital for the chronically ill but continued to admit tuberculosis patients. The Denmar State Hospital closed in 1990 and was converted to a correctional facility in 1993.

In 1995 ,Warden Stephen Yardley and his staff at the Denmar Correctional Center compiled a list of 277 names of sanitarium patients believed to be buried on site. William P. McNeel and members of the Pocahontas County Historical Society scoured the county death records from 1923 to 1946 and made many corrections and additions to the original list. At this time, tuberculosis was often fatal, and many patients died while at Denmar.

Most of the patients arrived from the South and most likely were a part of the Great Migration of blacks to the North in the early twentieth century. While all regions of West Virginia are represented, many of the patients resided in the southern coalfields. This raises questions about poor sanitary conditions in coal towns, which may have contributed to the spread of tuberculosis. The large number of miners at Denmar also raises speculation about the possibility of black lung disease.