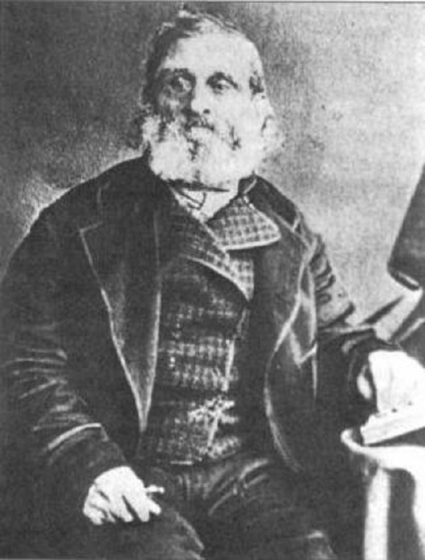 Wilson Ruffin Abbott was an American-born African Canadian and successful businessman and landowner in Toronto, Ontario. He was the father of Anderson Ruffin Abbott, Canada’s first African physician.

Abbott was born to a Scotch-Irish father and a free West African mother in Richmond, Virginia.  Abbott was still in his youth when he apprenticed as a carpenter. He left home at 15 to work on a Mississippi River steamer as a steward. Seriously injured when cord wood fell upon him, he was nursed by a Boston traveler’s maid, Ellen Toyer, whom he later married. He then moved to Mobile, Alabama, where he opened a general grocery store.

The Abbotts were indignant when the city required all free Negroes to provide bonds signed by two white men in pledge of their good behavior. In 1834, receiving an anonymous warning that his store was to be pillaged, he withdrew his savings, put his wife and two children aboard a steamer for New Orleans, and slipped away alone on the night his store was attacked. After a brief sojourn in New York, the Abbotts moved to Toronto in late 1835 or early 1836, one of hundreds of American Negro families to seek a greater degree of freedom in Upper Canada at this time.

While in Canada Abbott prospered as a businessman. His son Anderson Ruffin Abbott became the first African Canadian to practice medicine. By 1871 Abbott owned 42 houses, five vacant lots, and a warehouse, largely in Toronto, but also in Hamilton and Owen Sound. He helped purchase freedom for fugitive slaves.

As the Abbotts’ fortunes grew, they took an increasing interest in public affairs. Abbott served in the militia during the rebellion of 1837. In 1838 he was one of six organizers of the Colored Wesleyan Methodist Church, aiding in the purchase of property for it. He supported the Anti-Slavery Society of Canada under the Reverend Michael Willis.

In 1840, Mrs. Abbott helped organize the Queen Victoria Benevolent Society to aid indigent black women, and in later years she was active in the British Methodist Episcopal Church.

Wilson AbbottWilson Ruffin Abbott
« Previous PostFebruary 28: First Black Man in U.S. History Was Nominated to Serve on Fed Reserve Board in 1966 Next Post »Schooled by Youtube: Enslavement to Emancipation