Yoruba: One of the Largest African Ethnic Groups South of the Sahara Desert

Due to the slave trade of the eighteenth and nineteenth century, many people of African descent in America claim the Yoruba ancestry. The Yoruba people have been known for their craftsmanship and are considered to be the most skilled and productive group of people in all of Africa. The Yoruba are also considered one of the largest ethno-linguistic groups in sub-Saharan Africa.

The Yoruba people can be found throughout West Africa, as many have extended as far as Ghana, Togo, and Benin. However, the greatest group of Yoruba is found in Yorubaland, an area that is located in western Nigeria. The populated areas of Yorubaland allow for a centralization of prosperity and the development of a market economy which encourages extensive patronage of the arts.

The term Yoruba came about in the nineteenth century, and was originally confined to subjects of the Oyo Empire. Traditional Yoruba religious beliefs recognize a wide variety of deities, with Ọlọrun or Olodumare venerated as the creator and other spirits serving as intermediates to help with the concerns of humans.

Yoruba deities include “Ọya” (wind goddess), “Ifa” (divination or fate), “Ẹlẹda” (destiny), “Ibeji” (twins), “Ọsanyin” (medicines and healing), “Ọsun” (goddess of fertility, protector of children and mothers), and Ṣango (God of thunder). Each human being is also assumed to have his or her individual deity called an “Ori,” who is responsible for controlling destiny.

The first university in Nigeria was located in a Yoruba city. Originally called University College, it is now known as the University of Ibadan. 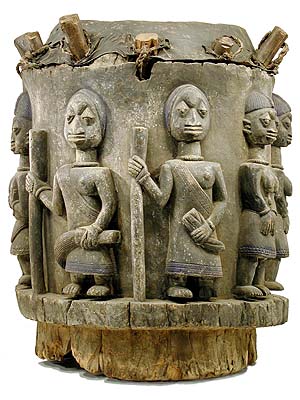