Butler Campbell was a young man when he arrived in Florida. When the Civil War ended, Campbell, a former slave with newfound freedom, was confused about what to do with his life. However, he did put a plan in motion and soon formed the Clifton Colored School.

Campbell was born October 26, 1848, in Anderson, South Carolina to Dock and Bedie Campbell. After hearing about land grants on the East Coast, he made plans to move to Florida. After homesteading the wrong piece of land, he ended up purchasing several acres for $75 from the State of Florida.

In 1875, Campbell married Lucy Warren. He purchased 118 acres on North Merritt Island. Campbell and his family settled just north of the Haulover, where he built his home on the edge of the Little Cove of Mosquito Lagoon, which was named “Laughing Waters” by their daughter.

Campbell and his wife had eleven children, five of whom attended Clifton School for the Colored, which was built their father along with Andrew Jackson, also a black landowner. Built around 1890, the school was primarily to give their children a proper education.

By 1910, most of the Campbell and Jackson children were of the age to be out of school or attending a school in Titusville that offered a higher education, and the little wooden structure was no longer used as a school house. 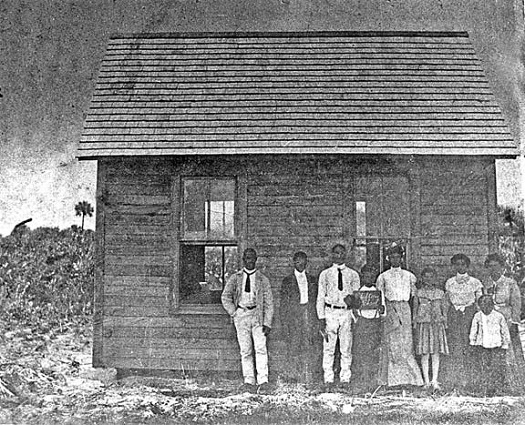