The approaching World War II and the depression of being neglected and segregated refocused the attention of the African-American’s art and literature towards social and racial criticism. It was evident from the work of many Black artists such as novelist Ann Petry, whose novel written in 1946, “The Street” provided a detailed depiction of the struggles of the Black women who used to work in Harlem, New York. In 1949, Gwendolyn Brooks, a native poet from Chicago, elaborated the everyday lifestyle of the Black urban community. She became the first African-American poet to own the Pulitzer Prize. From all the different categories related to arts and literature, Lorraine Hansberry who was also from Chicago grabbed tremendous popularity through her drama “A Raisin in the Sun” that opened on Broadway during the year 1959. 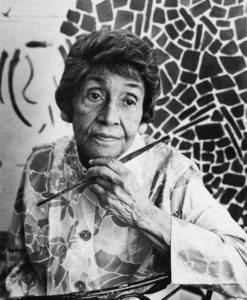 It was the 50s and 60s era, when few of the black artists, especially Black Women got the opportunity to be accepted as the mainstream artists of the American art. A printmaker and a sculptor, Elizabeth Catlett, spent most of her career in Mexico City as an expatriate. Her work and activism of her life were later investigated by the House Un-American Activities Committee. Catlett was known for her superb sculptures such as “Homage to My Young Black Sister” which she created in 1968. Adding some more to this, an 80-year-old abstract painter, Alma Woodsey Thomas got the title of being the first African-American woman to host a solo exhibition of her extravagant paintings at the Whitney Museum.

Writers and artists have played a prominent role in the different civil rights movements of the 50s and 60s. The poet Brooks composed a poem “The Last Quatrain of the Ballad of Emmett Till,” especially for the Black youth that was murdered in 1955, in Mississippi. She also featured the same intense social criticism in one of her volumes written in 1960. Poetry became one of the acclaimed ways to express solitude for the Black Arts movement and also for the artistic part of the Black Power movement. Sonia Sanchez, Carolyn M. Rogers, Jayne Cortez and Nikki Giovanni were some of the important female poets that emphasized mainly on the betterment of the Black community. An autobiography of the great Black activist Malcolm X which was written by Alex Haley influenced many other female Black activists who published their autobiography in 1974.