On this day in history, several Black slaves revolted against the White populace of New York in 1712. It resulted in the loss of a few freedoms Black people had in the colony after it went from Dutch to English rule in 1664.

Several factors went into the actual formation of revolt. Britain stripped a lot of freedoms from free Black people such as the right to own land and marry. Also, New York had a large concentration of slaves at this time with enslaved people making up around 20-percent of the population.

Even with the laws in place, the layout of New York when it came to its freed and enslaved Black populace was different compared to the southern plantations. Add to this that free and enslaved Black people usually worked together and slaves lived close to each other and you have the potential for groups to organize.

As it would happen, exactly this happened. Black slaves used the social structure of New York’s Black community at the time to plan the revolt. The night before the full-blown revolt, slaves set fire to a building near Broadway.

When the colonists came to snuff the fire, they were routed by slaves with weapons. A militia showed up to reestablish order. When the slave revolt was over, nine White people were killed, 70 Black slaves were arrested, 27 were put on trial, and 21 were sentenced to death. The methods of execution were picked to be particularly gruesome in public to curb future revolts from slaves.

The immediate outcome of the revolt saw colonists enforced laws about Black people congregating in groups larger than three and banning them from carrying firearms. Offenses such as rape, conspiracy, and property damage were death sentences. 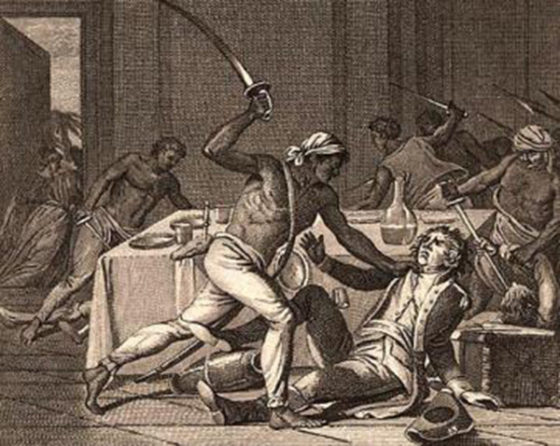 SOURCE: Mapping the African American Past