0 Posted by Jae Jones - March 17, 2022 - Injustices, LATEST POSTS
The assault and murder of a white woman in the community of Catcher in Arkansas ignited a race riot. On December 28, 1923, Effie Latimer (age twenty-five) was reported by newspapers the next morning as being raped and murdered. She had been shot in the back with a shotgun, and clubbed over the head with the same weapon.
A friend discovered Latimer and quickly summoned for a doctor  to come to the house. The doctor allegedly reported that Latimer regained consciousness at some point, long enough to identify the shooter as “William or Will” Bettis, but she could not identify the other two black men with him. At the time Latimer had been married for six years, but a week before her murder, her husband disappeared taking a dozen of chickens and half of the homes provisions.
The next day, two more African-Americans, Charles Spurgeon Rucks (age twenty-six) and John Henry Clay (age fourteen), were also arrested for the murder. After his arrest, Rucks was taken into the woods by Deputy Sheriff W. A. Bushmaier Jr. and “questioned” about the murder. Bushmaier promptly reported to the newspapers, and later testified in courtroom, that “Rucks had confessed to the crime in his presence.” According to the case files, however, Rucks never confessed. Clay was retained in the Van Buren jail, but Rucks was transported to the Fort Smith jail.
By the evening of Saturday, December 29, an angry white mob of more than 500 white citizens surrounded the jail at Fort Smith, demanding that the prisoners be handed over to them. Many others were running the Catcher roads threatening black residents, smashing tombstones in the black cemetery, and digging up remains of the deceased and burning them. At the Fort Smith jail, the sheriffs secretly removed the prisoners to the railroad station in Mansfield (Sebastian County), where they were whisked away to a Little Rock (Pulaski County) jail to await trial.
On December 30, Special Deputy Sheriff Frederick Creekmore shot and killed the sixty-five-year-old father of Rucks, an action described in the newspaper as an “unfortunate accident.” That same day, eleven black citizens were arrested and charged with night riding. They were held in a log cabin, and local officials contacted the governor to send in the National Guard to “blast” these black men out.
Bettis and Rucks were both convicted and sentenced to death. Clay was not tried until the regular March 1924 term of court. Because his gun was used, Clay was sentenced to the state penitentiary and “confined at hard labor for the period of his natural life.”  The Van Buren Press-Argus reported on February 15, 1924, that the noted black lawyer Scipio Jones had appealed to the Arkansas Supreme Court the death sentences of Bettis and Rucks. The appeal, based on legal technicalities, was lost, and on July 4, 1924, the same paper noted that Governor McRae refused to grant a stay of execution. Rucks and Bettis were electrocuted “in the death house of the penitentiary at Little Rock” on June 27, 1924. The newspaper further reported that “the condemned brutes spent their last night reading their Bible and praying for mercy” and that “they never at anytime admitted their guilt. 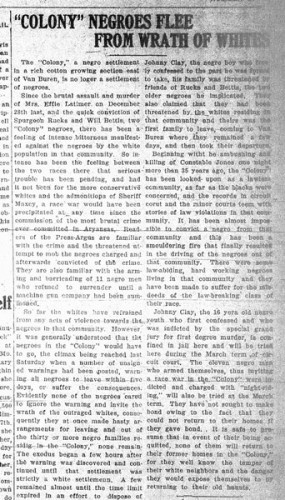