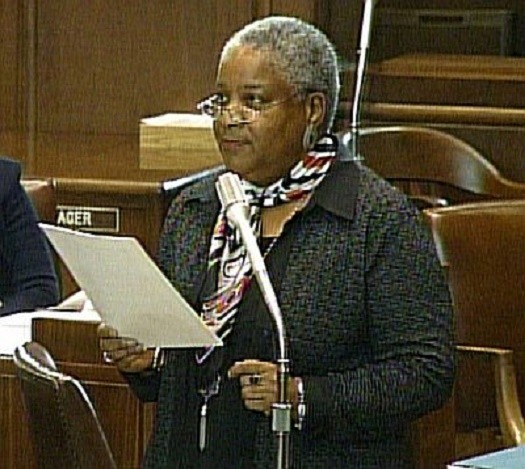 Avel Louise Gordly became the first African American woman to be elected to the Oregon State Senate in 1996. Gordly was born in Portland on February 13, 1947. Her father, Fay Gordly, was a railroad worker active with the Brotherhood of Sleeping Car Porters and Maids; her mother, Beatrice Bernice Coleman Gordly, was a long-time member of Mt. Olivet Baptist church and a Grand Worthy Matron of the Eastern Star.

Gordly graduated from Girls Polytechnic High School in 1965 and worked at Pacific Northwest Bell until 1970. That year, she enrolled at Portland State University, where she earned a degree in the administration of justice. After graduation, she worked for the Oregon Corrections Division as a women’s work-release counselor and later as an adult parole and probation officer.

A key affiliation for Gordly was the Black United Front (BUF). A national civil rights group headquartered in Chicago, Portland’s dynamic BUF was founded in 1979 by a core group of activists, including Ronald Herndon and the Reverend John Jackson. In addition to handling media work for the group, Gordly coordinated the Front’s Saturday School, whose African American history program was tied to curriculum reform in the public education system.

In 1979, Gordly joined the Urban League of Portland as head of its Youth Service Center. In 1983, AFSC hired her to lead their Southern Africa Program, which was focused on anti-apartheid and refugee relief, and Gordly made national headlines when she was promoted to regional director of the American Friends Service Committee (AFSC).

Gordly was subsequently elected state representative from north and northeast Portland in 1992, and she served until retiring in 2009. Her legislative record includes an array of initiatives that focus on cultural competency in education, mental health, and the administration of justice. Gordly has received numerous awards from groups such as the YWCA of Greater Portland, the NAACP, the Oregon Youth Authority, Delta Sigma Theta Sorority, the Girl Scouts, and the Oregon Commission for Women.

« Previous PostPoem: "Ode to Big Trend" by Terrance Hayes Next Post »Amadou Diallo: A Look Back Into a Police Brutality Case