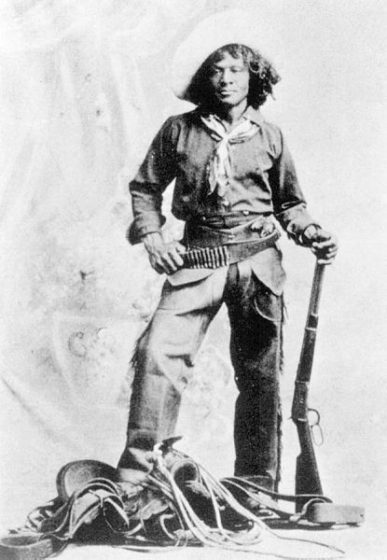 Nat Love, also known as “Deadwood Dick,” was the most famous Black cowboy. He was born in 1854 in Davidson County, Tennessee. Although he was born into slavery, he did learn how to read and write. He grew up with a love for wildlife and was known for being an all-around good person.

One day, Nat came across a group of cowboys delivering its herd and preparing to go back down into Texas. He noticed that some of the cowboys were Black, so after sharing a meal with the guys, he asked the trail boss for a job. The boss agreed to hire Nat but only if he could break a horse named “Good Eye,” the wildest horse in the herd. Bronco Jim, another Black cowboy, gave Nat some pointers so he could successfully ride that horse. After going through a number of trials, Nat adjusted to the ways of the cattle country and could handle any problem, from hail storms to hostile Native Americans. He carried a forty-five and used and learned to shoot better than any of his friends.

After leaving the Texas Panhandle, Nat rode into Arizona where he got a job working for an outfit on the Gila River.  He had ridden many of the trails of the southwest and he believed that he was a capable cowboy. While in Arizona working with Mexican vaqueros, he learned to speak Spanish and he became very good at reading brands. In the spring of 1876, Nat Love’s outfit received orders to deliver three thousand steer to Deadwood City in the Dakota Territory.

As the community was getting ready for the 4th of July, the mining men and gamblers had gotten together and organized a contest with a $200 prize. Each black cowboy had to rope, throw, tie bridles, and saddle a mustang in the shortest possible time. Nat won the contest with a time of nine minutes to complete all the tasks, so the town later gave Nat the title of “Deadwood Dick.”  He also impressed residents of the town with his shooting skills, nailing 14 bull’s eyes when others could only manage eight at best. The money he won that day ensured that he, as a Black cowboy, would be treated well while in town.