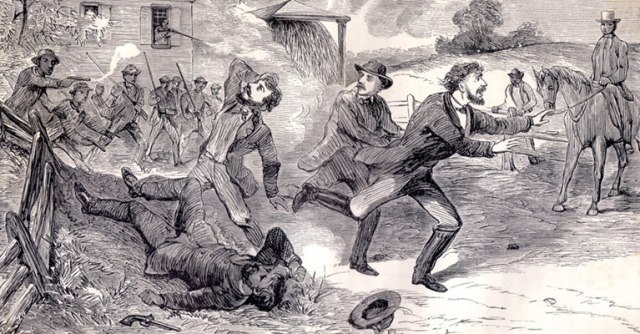 The Slaver demanded Parker to turn over his “property” meaning the two African Men he was hunting. Parker, a successful escapee himself, told him he had no “property” and commanded the slaver leave his door. Parker and the two courageous black men who successfully escaped from the slaver’s plantation refused to come down from their stronghold on the second floor, and instead summoned help from the neighborhood by sounding a horn.
————————–—
Click and Listen To The Gist of Freedom as we discuss The Book Black Abolitionists, with Stephanie Gilbert, a descendant of a “Shadrach Minkins Rescue” Mission Hero!Stephanie will listen to Chapter Four with Hosts, Preston Washington, Genealogists and Poet, Ty El- Gray (A Black Woman’s Smile)WWW.BlackHistoryBLOG.com
http://www.blogtalkradio.com/thegistoffreedom/2013/01/11/rescues-boycotts-literature-black-abolitionists-chp-45
————————-
On September 11, 1851, a Maryland slaver, and deputy U.S. marshal Henry H. Kline led a six man Maryland posse descended on William Parker’s, a black abolitionist’s house, in Christiana, Pennsylvania. By the time the slave hunters arrived at the house where the escapees were staying, the men inside had already been warned by the Philadelphia Vigilant Committee.

Parker, himself formerly enslaved, maintained his place as a “safe house,” a stop along the Underground Railroad. The countryside around Christiana supported several families of African American farmers who had escaped from slavery and settled on the southern edge of the free states.

The Slaver demanded that Parker turn over his “property” meaning the the two African Men who escaped from his plantation. Parker told him he had no “property” and commanded he leave his door.

Parker and the hunted black men refused to come down from their stronghold on the second floor, and instead summoned help from the neighborhood by sounding a horn. A crowd gathered and tension mounted.

When the posse looked around, they found themselves surrounded by armed members of the Organization for Mutual Protection as well as local white abolitionists. Violence erupted on both sides, As the men argued, a shot rang out, hitting the slaver in the chest, killing him almost immediately.

The old slaveowner was shot to death, and his son was seriously wounded. The posse quickly fled the scene.

The following day President Fillmore sent the United States Marines, federal marshals, and vigilantes descended on Christiana, Pennsylvania, arresting 141 people including four white men and 35 black men who were charged with treason, the largest number ever accused of that crime at one time.

By that time, William Parker was well on his way to Canada, along the Underground Railroad.

The men were taken to Philadelphia and housed in the city’s Moyamensing Prison while awaiting trial. That trial lasted for three weeks in October at the Federal Courthouse in Philadelphia. Federal prosecutors argued for a conviction of all of the defendants but Pennsylvania Congressman Thaddeus Stephens (Featured in Lincoln with his black mistress; Tommie Lee Jones & Epatha Merkelson), serving as the defendant’s attorney, managed to get acquittals or dismissed charges for all of the accused. In tribute to those who resisted slavery, the citizens of Christina, Pennsylvania named a number of streets after the leading participants with each street leading to the now famous Parker House.

The Christiana Rescue Mission caused alarm in both North and South. The fugitive slaves in the area realized the danger and fled to Canada in the days that followed. Many rescuers were arrested, including some Friends who refused to aid the U.S. Marshal in capturing the slaves. None of those arrested were punished, however.

Frederick Douglass viewed the violence at Christiana as having a special moral and political significance because the event was evidence of Black strength. Violent resistance and African-American courage and determination were exhibited on a national stage through this event.

The Slavers failure to convict the rescuers reflected the deepening opposition to slavery in the North. Successful freedom seekers had escaped bondage at first through the help of a courageous organized men- Black and White. Eventually, where traffic was heaviest, small groups, such as the Philadelphia Vigilant Committee, formed to join in the work with larger national and international organizations.

As the struggle to maintain a North-South compromise grew more critical, anti-slavery propagandists spread the conviction that slavery was evil. During the final decade of the Underground Railroad, the need for secrecy lessened, and the small but steady stream of fugitive slaves more readily found help in crossing the Mason and Dixon line.