What Are You? Black, African-American, Afro-American, or Black-American

Black tells you about skin color and what side of town you live on. African-American evokes discussion of the world. -Rev. Jesse Jackson

Blacks, Black-Americans, African-Americans, and  Afro-Americans are terms that are frequently used in magazines, newspapers, and across the internet when referencing black people. So, what brought about the name change from “negro” and “colored” to these terms.

The reference from  “negro” to “black” shifted during the 1960s. However, in 1988, Jesse Jackson launched a campaign to encourage the use of the term “African-American” when referencing black people  as a way to emphasize “a sense of ethnic identity.” Over the next few years, prominent civil rights leaders and politicians would join Jackson in promoting this terminology change, and the use of “African-American” would be adopted by major newspapers and public agencies around the country. While many Americans voiced their support for the term, Jackson’s campaign was not received with enthusiasm by all.

People who grew up with the term “colored” were not comfortable with the new term because hearing the word “colored” was the norm for them. But there were many others who appreciated the sense of heritage that was implied by the term African-American. One of the most ground-breaking moments came when James Brown released his song “I’m black and I’m proud.” However, Black does not define a race of people. It’s a color. It’s an adjective, not a noun. And a long time before it was accepted, it was not accepted.

The term African-American has had several incarnations in previous years, with “Afro-American” also having small spurts of popularity. But supporters of the African-American movement found fault with the usage. “We came from Africa,” said Dr. Olive Taylor, a professor of history at Howard University. “We didn’t come from ‘Afro.'”

So, how do African-born individuals feel about the name change? Foreign-born blacks from the Caribbean and from Africa, make up almost 30% of the black population living in New York City and no matter how long they live in the US, those born in Africa will never accept being called “African-Americans.”  However, not only are these blacks resisting the name African-American many others in the United States are also holding on to the name from the past: “black.”  But in the end, everyone has their own preference as to what term they prefer when referencing their ethnic background and it will totally depend on that person as to which term is used. No one is forcing either one on them. 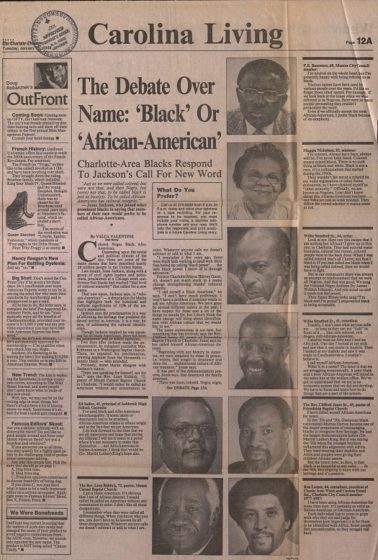