On September 25, 1965, the Kansas City Athletics start ageless wonder Satchel Paige in a game against the Boston Red Sox. The 59-year-old Paige, a Negro League legend, proved his greatness once again by giving up only one hit in his three innings of play.

Leroy Page was born on July 7, 1906, in Mobile, Alabama. Page’s family changed the spelling of their name to Paige to differentiate themselves from John Page, Leroy’s absent and abusive father. “Satchel” got his nickname as a boy while working as a luggage carrier at the Mobile train station. When he was 12, his constant truancy coupled with a shoplifting incident got him sent to the Industrial School for Negro Children in Mount Meigs, Alabama. It turned out to be a lucky break, as it was there that Paige learned to pitch. After leaving the school, he turned pro.

From 1927 to 1948 Paige served as the baseball equivalent of a hired gun: He pitched for any team in the United States or abroad that could afford him. He was the highest paid pitcher of his time, and he wowed crowds with the speed of his fastball, his trick pitches and his considerable bravado. Just for fun, Paige would sometimes call in his outfield and then strike out the side. From 1939 to 1942, the Kansas City Monarchs paid up for his services and were justly rewarded: Paige led the team to four consecutive Negro American League pennants from 1939 to 1942. In the 1942 Negro League World Series, Satchel won three games in a four-game sweep of the Homestead Grays, led by famed slugger Josh Gibson. 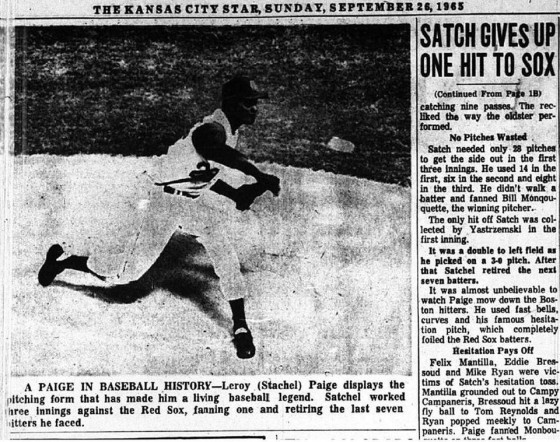 Paige’s contract was bought by Bill Veeck’s Cleveland Indians on July 7, 1948, his 42nd birthday. He made his major league debut two days later, entering in the fifth inning against the St. Louis Browns with the Indians trailing 4-1. He gave up two singles in two innings, striking one man out and inducing one batter to hit into a double play. The Indians lost the game 5-3 in spite of Paige’s contribution. That year Satchel Paige went 6-1 with a solid 2.48 ERA for the World Champion Cleveland Indians and was named to Major League Baseball’s All-Star Team for the American League in 1952 and 1953, when he was 46 and 47 years old respectively.

On September 25, 1965, Paige’s three innings for the Kansas City Athletics made him, at 59 years, 2 months and 18 days, the oldest pitcher ever to play a game in the major leagues. Before the game, Paige sat in the bullpen in a rocking chair while a nurse rubbed liniment into his pitching arm for the entire crowd to see. Any doubts about Paige’s ability were put to rest when he set down each of the Red Sox batters he faced except for Carl Yastremski, who hit a double.

Arguably the greatest pitcher of his era, Paige was inducted into the Baseball Hall of Fame in 1971.

« Previous PostThe Sherman Riot of 1930: Major Outbreak of Racial Violence in the United States Next Post »Looking Black On Today In 1903, the Saint Luke Penny Savings Bank Opened It Doors