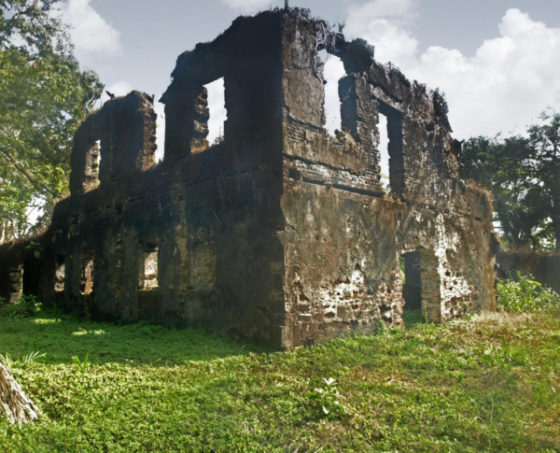 Bunce Island is an island in the Sierra Leone River. It is situated in Freetown Harbour, the estuary of the Rokel River and Port Loko Creek, about 20 miles upriver from Sierra Leone’s capital city Freetown.

The early history of the castle begins with it being operated by two London-based firms, the Gambia Adventurers and the Royal African Company of England, the latter a “Crown-chartered company,” subsidized by the British government. The castle was not commercially successful at this period, but it served as a symbol of British influence in the region.

The first phase of the castle’s history ended in 1728 when an Afro-Portuguese competitor, José Lopez da Moura, who was involved in the slave trade, raided Bunce Island. The castle was abandoned until the mid-1740s.

During the second phase of the castle, Bunce Island was operated later by two London-based companies: Grant, Oswald & Company and John & Alexander Anderson, and at that period it was a highly profitable enterprise. During the second half of the 18th century, the companies sent thousands of African captives from Bunce Island to British- and French-controlled islands in the West Indies and to Britain’s North American colonies. The London-based owners grew wealthy from the castle’s operations.

During the early history of the castle, Afro-Portuguese sold slaves and local products there. During its late history, Afro-English families, such as the Caulkers, Tuckers, and Cleveland’s, sold slaves at Bunce Island. The slave ships came from the British ports of London, Liverpool, and Bristol; from Newport, Rhode Island in the North American colonies; and from France and Denmark. They transported slaves mostly to the Caribbean and the American South.

French naval forces attacked the Island four times in 1695, 1704, 1779, and 1794, causing extreme damage or destroying it.
The castle was also attacked by Pirates twice in 1719 and again in 1720, including Bartholomew Roberts, or “Black Bart,” the most notorious pirate of the 18th century. Bunce Island shut down for slave trading and completely abandoned around 1840.

Bunce Island
« Previous PostDid You Know That, In 2014, Bob Marley Was 5th On The Forbes List Of Top -Earning Deceased Celebrities? Next Post »8 Secrets To Success According To Madam C.J. Walker