In 1866, exactly 150 years ago, the Ku-Klux-Klan was formed. The first domestic terrorist movement in the United States was reworked violence so that it would fit a modern post-slavery nation. The group sought out to disempower and control rural African-Americans. They not only used violence but also used bizarre costumes and performances to create a climate of terror that could be spread by word of mouth and through powerful national newspaper network.

The first Klan flourished in the Southern United States during the late 1860s, then died out by the early 1870s. It sought to overthrow the Republican state governments in the South during the Reconstruction Era, especially by using violence against African American leaders. With numerous chapters across the South, it was suppressed around 1871, through federal enforcement. Members made their own, often colorful, costumes: robes, masks, and conical hats, designed to be terrifying, and to hide their identities.

“The Ku-Klux did not wear white uniforms like the Klan of the 1920s. Their varied costumes featured animal horns, fake facial hair, polka dots and reflective metals, blackface, and, often, women’s dress. Those who made and wore these costumes intended to define a new basis of southern white authority and to force freedpeople and their allies to acknowledge it.” 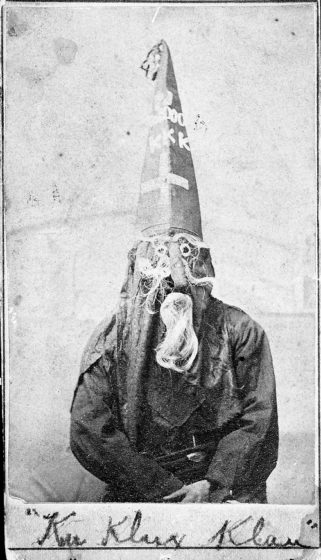