By the 1940s Detroit already had a long history of racial conflict. Race riots had occurred in 1863 and as recently as 1941. By the 1920s the city had become a stronghold of the Ku Klux Klan, an organization committed to white supremacy. The industrial plants provided jobs but not housing. White communities militantly guarded the dividing lines imposed by segregation throughout Detroit’s history. As a result, the city’s 200,000 black residents were cramped into 60 square blocks on the East Side and forced to live under deplorable sanitary conditions. Ironically, the ghetto was called Paradise Valley.

The Detroit riot began at a popular and integrated amusement park known as Belle Isle. On the muggy summer evening of June 20, 1943, the playground was ablaze with activity. Several incidents occurred that night including multiple fights between teenagers of both races. White teenagers were often aided by sailors who were stationed at the Naval Armory nearby. As people began leaving the island for home, major traffic jams and congestion at the ferry docks spurred more violence. On the bridge which led back to the mainland, a fight erupted between a total of 200 African Americans and white sailors. Soon, a crowd of 5,000 white residents gathered at the mainland entrance to the bridge ready to attack black vacationers wishing to cross. By midnight, a ragged and understaffed police force attempted to retain the situation, but the rioting had already spread too far into the city.

Two rumors circulated which exacerbated the conflict. At the Forest Club, a nightclub in Paradise Valley which catered to the black population, a man who identified himself as a police sergeant alerted the patrons that “whites” had thrown a black woman and her baby over the Belle Isle bridge. The enraged patrons fled the club to retaliate. They looted and destroyed white-owned stores and indiscriminately attacked anyone with white skin. Similarly, white mobs had been stirred up by a rumor that a black man had raped and murdered a white woman on the bridge. The white mob

centered around the downtown Roxy Theater which harbored a number of black movie-goers. As the patrons exited the theater, they found themselves surrounded by gangs who attacked and beat them. As rumors about the incidents in Paradise Valley and the downtown area spread through the night, so did the nature and the extent of the violence. White mobs targeted streetcars transporting black laborers to work, forced the cars to come to a halt, and attacked the passengers inside. They also targeted any cars with black owners, turning them over and setting them on fire.

By mid morning, black leaders in the community had asked Mayor Edward J. Jeffries to call in federal troops to quell the fighting. But it was not until late that evening, when white mobs invaded Paradise Valley, that Jeffries took the necessary steps to get outside help. Around midnight, a disturbing silence reigned over the city as a truce between the citys warring factions was kept by U.S. Army troops. More than 6,000 federal troops had been strategically stationed throughout the city. Detroit, under armed occupation, virtually shut down. The streets were deserted, the schools had been closed, and Governor Harry Francis Kelly had closed all places of public amusement. Most of the Paradise Valley community feared to leave their homes. Yet spurts of violence still flared up. 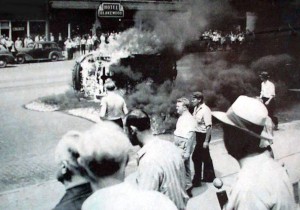 As late as Wednesday, white mobs threatened black students leaving their graduation ceremony at Northeastern High School. The graduates had to be escorted home by truckloads of soldiers bearing bayonets.

The days of rioting had been severe. Twenty-five black residents and nine white residents had been killed. Of the 25 African Americans, 17 had been killed by white policemen. The number injured, including police, approached 700 while the property damage, including looted merchandise, destroyed stores, and burned automobiles, amounted to $2 million. The Axis Powers were quick to point out that the riot was symptomatic of a weak nation. The German-controlled Vichy radio broadcasted that the riot revealed “the internal disorganization of a country torn by social injustice, race hatreds, regional disputes, the violence of an irritated proletariat, and the gangsterism of a capitalistic police.”