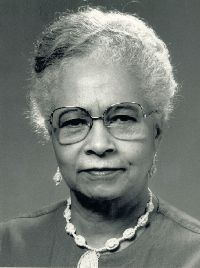 Marjorie Peebles-Meyers, M.D., was the first African-American woman to graduate from Wayne State University School of Medicine, the first to be accepted as an intern at Detroit Receiving Hospital, and the first to become chief resident of a major Detroit hospital.

Peebles-Meyers was born in Harlem in 1915. She attended Hunter High School, a prestigious all-girls public school for academically gifted children. After graduating from Hunter College in 1937 with a degree in physics and chemistry, she applied to the medical school at Columbia University. However, she was told to “come back in three years.” Determined more than ever, she enrolled in the medical school at Howard University in Washington, D.C., in 1938. In 1940, she transferred to the Wayne State University School of Medicine, and graduated in 1943, becoming the first African-American female to receive a medical school from the institution.

After completing her internship and residency program, Peebles-Meyers was appointed chief resident at Detroit Receiving Hospital in 1946, the first African-American woman appointed to that position. She also was the first African-American woman to receive a teaching appointment at the Wayne State University School of Medicine, serving as clinical assistant and clinical associate professor in the Department of General Medicine.

She joined Dr. Eugene Shafarman in Detroit’s first interracial medical practice. Barred from full privileges at private hospitals, Peebles-Meyers at first relied on her partner and other white doctors to admit her patients. Her private practice eventually employed health workers of different racial backgrounds. After she retired from private practice, she was named chief physician of Ford Motor Company.