Did You Know A Black Man Invented The Reversible Baby Carriage?

William H. Richardson patented an improvement to the baby carriage in the United States on June, 18, 1889.

You can view U.S. patent # 405,600 below. W.H. Richardson improved the first baby carriage. He made the buggy more manageable. 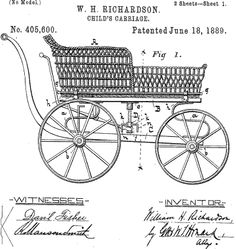 He invented the first reversible baby carriage. The buggy designed with a joint in the center that allowed for the bassinet to face towards the person pushing. He invented it so that the bassinet could face the opposite way as well. He also fixed the axels on the wheels so that it is more mobile. His new invention with the wheels allowed it to move into smaller spaces with less trouble.