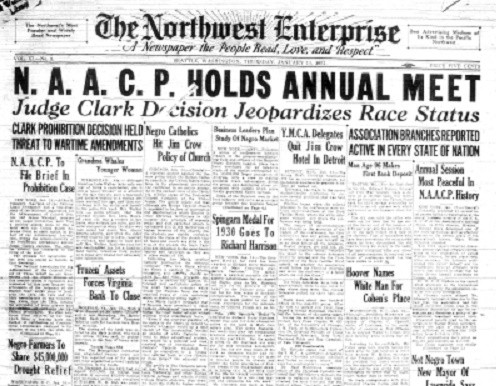 Northwest Enterprise was founded in 1920. It served as an important role in supporting and maintaining an emerging African American community in Seattle, Washington and throughout the Northwest. The newspaper served its community in five specific ways: visibility, success, support of black institutions, community leadership, and resistance.

Wiliam H. Wilson founded the NW Enterprise in 1920 and edited the weekly until 1935. Under his guidance the newspaper was a strong voice for the African American community and for broader issues of racial justice. The mission of the newspaper: “The Northwest Enterprise wishes at this time to declare that it is first, last and always a Negro newspaper, ever ready to fight the battles of the race… Vigilance must be our watchword!”

The Northwest Enterprise helped make African Americans well-known and visible, running stories and photographs of famous blacks (e.g. Joe Louis) as well as everyday people, such as a local barber or druggist. The paper presented a stark contrast to the Seattle daily newspapers, which either ignored or stereotyped African Americans.

Not only were the achievements of the famous (e.g. black athletes in the 1936 Olympics such as Jesse Owens or Ralph Metcalfe) but also “ordinary” people who graduated from high school or college or worked in their churches. The newspaper also publicized local institutions, such as churches, lodges, and civil rights groups, signaling their importance.