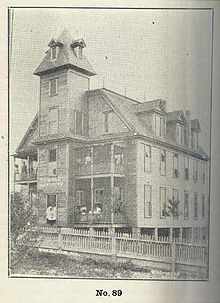 Carrie A. Tuggle spent her life servicing troubled and homeless black boys and girls. She founded The Tuggle Institute in 1903. The institute was opened with only $2.50, and was to provide a home to destitute children and to educate them.

Tuggle was born on May 28, 1858, at Eufaula, Alabama. Her father was a former slave and a Mohawk Indian chief. She married John Tuggle, a native of Columbus Ohio, and moved to Birmingham in the early 1900s, in search of better economic opportunities and a social life.
While living in Birmingham, Tuggle held the position of Grand Worthy Councilor from 1891 to 1899. In 1901, she was appointed to the Office of Supreme Worthy Councilor after her husband had refused to contest for the post.

Tuggle also created and edited the black newspaper, the Birmingham Truth, between 1902 and 1910. While working as a social worker in her early career, Tuggle pleaded before a court to pardon two juvenile delinquents from a prison sentence, volunteering to take them under her care and reform them. The action received appreciation from residents such as A. G. Gaston, and inspired her to establish the Jefferson County Juvenile and Domestic Court.

Tuggle did much towards the cause of women’s suffrage in Jefferson County, urging many other black women including teachers to register as voters. During this time, Tuggle also suffered major setbacks in her personal life when one of her daughters, Mamie Adams, a leading social activist, died. Continuing to struggle to raise funds for the institute, Tuggles health began to decline. She was confined to bed for six months, she died in 1924. After her death, in 1926 the Tuggle Institute became part of the Birmingham City Public Schools.