The Colored Hockey League of Maritimes in Nova Scotia formed in 1894 across the provinces of Canada.  Formed 22 years before the National Hockey League. The all-black ice hockey league held over 12 teams and employed hundreds of African-Canadian players. Games between Black club teams were arranged by formal invitation only. Despite hardships, criticism, and prejudice, the league existed well into the mid-1920s. Skilled and well-educated leaders led the teams. The league emerged as a premier force in Canadian hockey and supplied the resilience necessary to preserve a unique sports culture.

The teams that played in the league consisted of the Dartmouth Jubilees, the Halifax Eurekas, the Truro Sheiks, and the AfricVille Brown Bombers. Noted that the Colored Hockey League used the teachings of Booker T. Washington, the Bible and speech resources from the Underground Railroad in their plays and strategies on the ice. Racial discrimination eventually caused the teams to dissolve, and the game would not be played again professionally until years later. 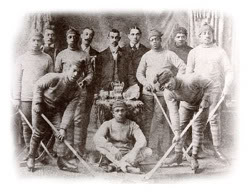