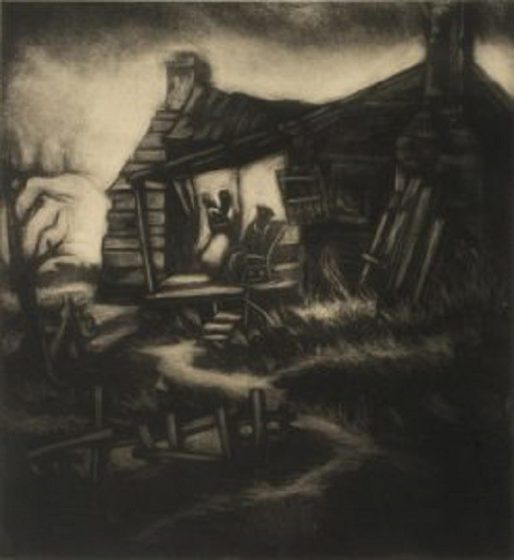 Dox Thrash (1893-1965) was an accomplished draftsman, printmaker, watercolorist, and painter, whose art reflected his experiences as an African American in Philadelphia. He became well known in the 1940s after developing the Carborundum printmaking technique at the Philadelphia Fine Print Workshop (311 Broad Street) of the Works Progress Administration’s Federal Art Project. By rubbing coarse Carborundum crystals onto a metal plate with a heavy flatiron, he created prints with dense blacks, smooth, sculptural forms, and velvety textures.

Thrash was born in Griffin, Georgia, on March 22, 1893. He was the second of four children in his family. At the age of fifteen, he left home in search of work up north. He was part of the Great Migration (African American) looking for industrial work in the North.

The first job that Thrash got was working with a circus and a Vaudeville act. Three years later, he moved to Chicago, a town that was opening its mind to Black artists. He got a job as an elevator operator during the day, and used this source of income to attend the School of the Art Institute of Chicago at night.

Thrash joined the army at the age of 26 and fought in World War 1. He was placed in the 365th Infantry Regiment, 183rd Brigade, 92nd Division, also known as the Buffalo Soldiers. During combat, Thrash suffered shell shock and a gas attack, but was not permanently injured.

In 1925, he settled himself in Philadelphia and took a job working as a janitor. In his free time, he continued his art and used his talent to create a poster for the 2nd Annual National Negro Music Festival. This gained him local recognition and opened doors for new artistic endeavors. He became active in the Tra Club of Philadelphia, giving his work a wider audience.

Thrash is most widely known for his work on the Federal Art Project from 1936 to 1939. While working on this project, he invented the process of carborundum mezzotint, a printmaking technique. Carborundum printmaking uses a carbon-based abrasive to burnish copper plates creating an image that can produce a print in tones ranging from pale gray to deep black. The method is similar to the more difficult and complicated mezzotint process developed in the 17th century. Dox Thrash spent the later years of his life mentoring young African American artists. He died in 1965.