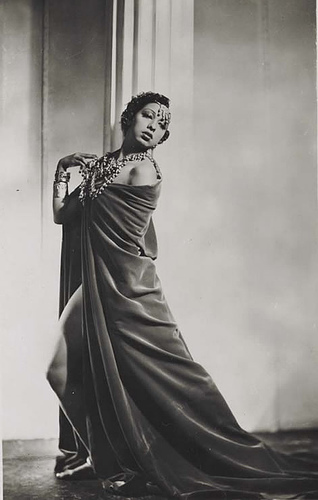 In a photo that we found on Black History Album , we see this great image called “Josephine Baker in En Super Folies, 1937” .

Given the nicknames “Black Venus,” “Black Pearl,” “Creole Goddess,” as well as “La Baker” in her adopted country of France, Josephine Baker was known as the “It girl who danced her way through the 20’s and 30’s only dressed in bananas.” A dancer, singer, actress and a comedian all in one, Josephine Baker is noted for being the first woman of African descent to star in a major motion picture, to integrate an American concert hall, and to become a world famous entertainer.  She was a star of stage, screen, and recordings, as well as a civil rights activist and an honored military woman during World War II.

[img_tags]josephine baker
« Previous PostWillie "Contact" Lanier: One of the Greatest Football Linebackers in the NFL Next Post »Gone But Not Forgotten: Happy Birthday To The Legendary Dancer & Choreographer, Mr. Alvin Ailey!