Richard Wright knew at an early age that he wanted to be a writer. At the age of 16, he was overjoyed when a local newspaper printed one of his first stories. With determination, he went on to acquire fame with the publication of one of his most renowned works, “Native Son.”

Wright was born in Roxie, Mississippi, in 1908. His grandparents were slaves and his father abandoned the family when he was six. His mother worked as a cook to support the family. Although none in Wright’s family encouraged his dream to be a writer, he refused to give up. He took different odd jobs in the South, but constantly faced the prejudices and insults of  Jim Crow. 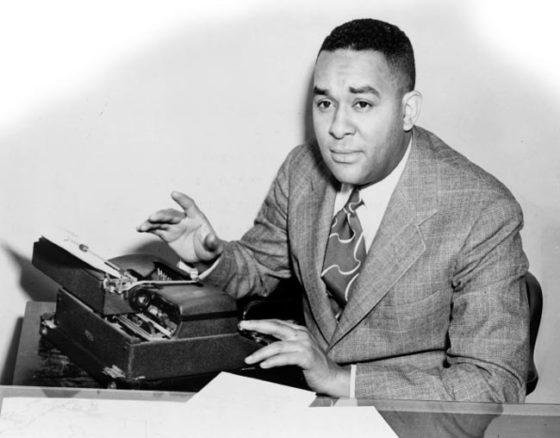 In 1927, he packed up and left the south to migrate to Chicago. After working several unskilled jobs, he was given an opportunity to write. He joined the John Reed Club in Chicago, an organization set up by the Communist Party to recruit writers into its ranks. Wright joined the Party, and in 1937, he went to New York to write for the Daily Worker, the Party’s newspaper.

His first book, “Uncle Tom’s Children,” was greeted with critical praise. His next work, “Native Son,” the story of a black man who inadvertently kills a white woman, made him famous. The book went on to become a bestseller and was eventually staged as a play on Broadway by the renowned director, Orson Welles. He also wrote “Black Boy,” an instant bestseller that was based on his life growing up in the South.

Literary critics believe his work played an important role in changing race relations in the United States. He received several literary awards, such as the Spingarn Medal, the Guggenheim Fellowship, and the Story Magazine Award.

In 1946, he moved to Paris, France, and in 1947, he became a French citizen. He was involved in various political affairs, such as the Pan-African movement, and became very distrusting of American control and unwilling to visit the U.S. In 1943, the FBI started to have Wright under surveillance, and in the 1950s, Wright was blacklisted by Hollywood studio executives.

On November 8, 1960, he gave his final controversial lecture to students and members of the American Church in Paris called, “The Situation of the Black Artist and Intellectual in the United States.” He said that American society reduced the most militant members of the black community to slaves whenever they wanted to question the racial status quo, a sentiment many may argue still holds some truth today. Richard Wright died on November 28, 1960.