The First Black Graduate from the University of Alabama: Vivian Malone Jones

Vivian Jones Malone was one among the first two Black students enrolled at the University of Alabama in 1963. She was the university’s first African-American graduate. Malone became famous when she defied the Alabama Governor, George Wallace’s infamous rule of “stand in the schoolhouse door,” which was meant to block her, alongside her colleague- James Hood from enrolling at the all-Whites University. Her entrance into the Alabama University came during the time when the struggle for civil war rights marred the country at the South. Merely a day after Malone and Hood were escorted into the university by the federal National Guard Troops, on 12th July, 1963, a civil rights leader, Evers Medgar was shot dead. This proved how strong the Malone and Hood’s enrollment was; serving as a landmark event in the struggle for equality and civil rights.

Vivian Malone Jones was born on the 15th day of July, 1942, in Mobile, Alabama as the fourth child among eight siblings. Both of her parents worked at the Brookley Airforce Base where her mother served as a domestic servant while her father served in the maintenance department. Vivian’s parents both knew the power of getting the education and they emphasized that their children must receive education, ensuring that each of their eight children attended a college. Therefore, most of Malone’s siblings attended the Tuskegee University.

Before enrolling in Alabama Agricultural and Mechanical University in February, 1961, Vivian initially attended the Central High School. This was one of the few colleges meant for the Black students in the state of Alabama. She successfully attended her studies at the university, thereby receiving a Bachelor’s Degrees in Business Education, two years later, before the university was fully chartered/accredited. In order to receive an accredited degree, Vivian Jones applied to the University of Alabama, School of Business Administration and Commerce. She was a transfer student at the age of 20 years when she and Hood were enrolled at the University of Alabama. Unfortunately, the two had to wait for about 5 hours due to Mr. Wallace’s refusal of their admission to the university. Mr. Wallace had initially refused to address the two students and only looked into their application case after the arrival of the federalized guard troops. Vivian and Hood thereby entered the Foster Hall and processed their registration, and then went to the dormitories and are at the cafeteria without experiencing ant further rejection due to their race. 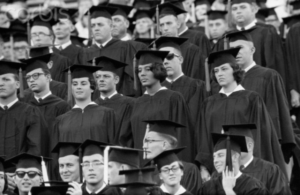 On the 30th day of May, 1965, Vivian Malone entered the historical records for being the first African-American to graduate from the University of Alabama, after 134 years of the university’s existence. She earned her Degree in Business Management with a B+ (plus) average grade. Upon her graduation, Vivian could not easily find a job in Alabama. Therefore, she travelled to Washington, D.C. where she worked at the civil rights division of the Justice Department. She later became the director of urban affairs and civil rights advocate, and later, the Director of the Environmental Justice at the Environmental Protection Agency. Malone later retired in 1996 at the age of 54 and died on 13th October, 2005.

Bledsoe, Christena. “Vivian Malone Jones and the VEP: From Integration to Voter Registration”

« Previous PostWilliam Henry Johnson: Noted as Being the First African American to Practice Law in the Nation Next Post »Augustus Lushington: First African-American Veterinarian With a Degree in the U.S.