From Janitor To Medical Revolutionary: A Second Chance To Pursue A Dream

The bank crash of 1930 wiped out a young man’s entire savings, destroying his dream of going to medical school. But, this didn’t stop him from going on to revolutionize the medical profession. That man was Vivien Thomas, an aspiring physician. His lack of funds forced him to drop out of college and, with work hard to come by amidst the Great Depression, he took a job sweeping floors at Vanderbilt University. There, Dr. Alfred Blalock took notice of this African American janitor and realized he had great potential to be so much more. Blalock hired Thomas as his surgical assistant. This began a decades-long association, during which the pair became a creative and formidable force in the new “golden age” of heart surgery. 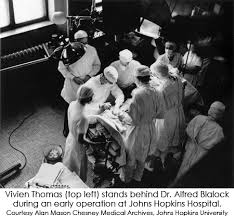 Thomas was a quick study, with particularly skilful hands. He worked diligently and learned to perform surgical operations, chemical reaction procedures and data analysis with precision. His quiet dedication to Blalock and the experiments was invaluable. When Blalock moved to Johns Hopkins in 1941, he asked Thomas to accompany him. Thomas joined Blalock’s surgical team and helped to develop the “Blue Baby” operation, also known as the Blalock-Taussig shunt. Blue Baby (Tetralogy of Fallot) is a congenital defect involving multiple abnormalities of the heart. The condition causes blood to be diverted past the lungs, resulting in a lack of vital oxygen being transported throughout the body. It’s this oxygen deprivation that causes the infant’s bluish color (cyanosis) and gives the syndrome its name. Before Thomas and Blalock developed the Blue Baby operation, 25 percent of babies born with this condition died before their first birthday-by the age of ten, 70 percent would die. The procedure to correct Blue Baby was painstakingly worked out by Thomas over a two-year period. Ultimately, he joined an artery leaving the heart to an artery leading back to the lungs. This gave the blood a second opportunity to absorb the critical oxygen and transport it throughout the body. Delicate instruments were needed to perform the corrective heart surgery on their tiny newborn patients. Since no such instruments then existed, Thomas designed and built them himself.

The first operation was performed on November 29, 1944. When the baby’s blue face turned pink from the now oxygenated blood, Thomas was elated. He later said, “You have never seen anything so dramatic. It was almost a miracle.” The promise the procedure held was quickly recognized and, within the first year, more than 200 operations were performed. Since the 1940s, countless patients have benefited from Thomas and Blalock remarkable discovery. In addition to treating Blue Baby, this technique was also adapted to treat patients with a variety of other heart diseases.