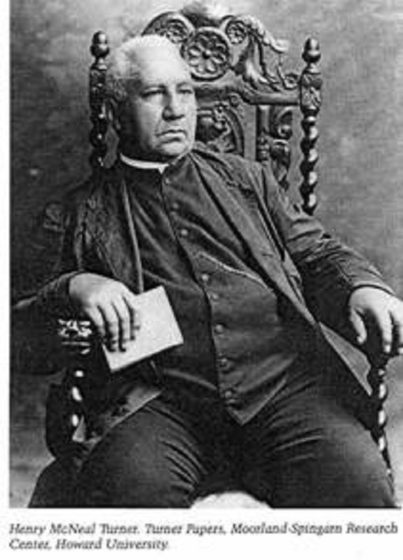 Henry McNeal Turner was a Bishop of the African Methodist Episcopal Church. He was also an author, editor, human rights advocate and fervent proponent of the “Back to Africa” movement.

Turner was born free in South Carolina. He was self-educated and recognized as a outspoken gifted speaker. In 1848, he joined the Methodist Episcopal Church South and five years later was licensed as a lay exhorter to travel throughout the South preaching and evangelizing. In 1858 he joined the African Methodist Episcopal (AME) Church and the following year was assigned to the AME mission in Baltimore, which enabled him to enroll in Trinity College for divinity study, his first formal education. He was ordained as a deacon in 1860 and an elder two years later.

He held a series of political offices in Georgia and in 1876 became director of the AME publishing house in Philadelphia. Four years later he was elected bishop in Georgia.

He founded AME annual conference in Sierra Leone, Liberia, and South Africa. Disillusioned by the racism in the United States, he later moved to Windsor, Ontario, where he died.