John Adam “Sleepy” Estes: One of the Most Influential Artists in Blues History

John Adam “Sleepy” Estes was a singer, guitarist, and songwriter who is considered to be one of the most important artists in blues history.

Estes was born into a sharecropping family just outside of Ripley, Tennessee, but raised in Brownsville. He got his nickname “Sleepy” because he liked to take a lot of naps. Estes lost the sight in his right eye after an accident as a young child. Afterwards, he learned to play guitar and would perform at parties and picnics around his home, often with mandolin player Yank Rachell. In the 1920s, Estes, Rachell, and harmonica player Hammie Nixon went to Memphis, where they played on street corners and in parks. 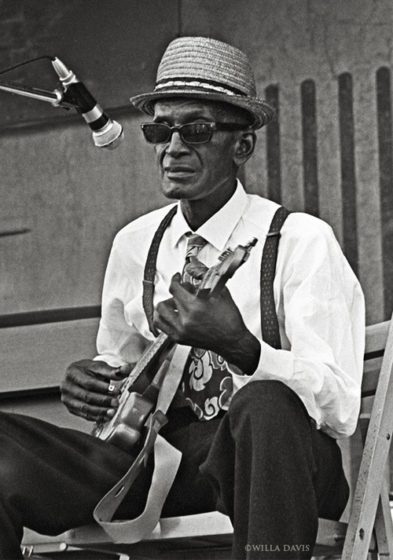 He officially began his recording career in 1929 in Memphis, Tennessee. Years later, he relocated to Chicago where Estes recorded for Decca. From 1940 to 1941, Estes recorded with Bluebird Records. Estes sang with a distinctive “crying” vocal style, as his sound was that of a very old man, even in his young recording days.

In 1948, Estes returned moved back to Tennessee, where he ended the first phase of his career. However, he continued to perform throughout Brownsville and Memphis. In 1950, he and Nixon recorded for Memphis label Sun Records, but by this time, he was totally blind. It was during this time he faded into obscurity and many people had thought he had died.

By 1962, Estes was rediscovered, but he was found to be living in poverty. He was quickly swept up in the folk-blues craze of the era, which revived his career. He appeared in two documentaries: Citizen South and Citizen North in 1962 and The Blues in 1963. He signed with Delmark Records and recorded The Legend of Sleepy John Estes and other albums throughout the 1960s. In 1964, he played at the Newport Folk Festival and went to Europe with the American Folk Blues Festival package.

Most of Estes’ recordings were original works that ultimately became blues standards with adaptations by B.B. King, Muddy Waters, and Taj Mahal. Estes died in 1977 after having a stroke. He was posthumously inducted into the Blues Hall of Fame in 1991.