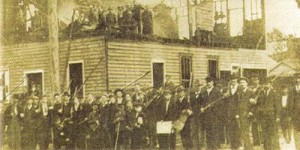 A politically motivated attack by whites against the city’s leading African-American citizens, the Wilmington Race Riot of 1898 documents the lengths to which Southern White Democrats went to regain political domination of the South after Reconstruction.  The violence began on Thursday, November 10th in the predominantly African American city of Wilmington, North Carolina, at that time the state’s largest metropolis.  Statewide election returns had recently signaled a shift in power with Democrats taking over the North Carolina State Legislature.  The city of Wilmington, however, remained in Republican hands primarily because of its solid base of African American voters.  On November 10th, Alfred Moore Waddell, a former Confederate officer, and a white supremacist led a group of townsmen to force the ouster of Wilmington’s city officials.

Waddell relied on an editorial printed in the African American-owned Wilmington Daily Record as the catalyst for the riot.  Alex Manly, the editor of the Daily Record, had published an editorial in early November arguing that “poor white men are careless in the matter of protecting their women.”  Paraphrasing articles by Ida B. Wells on the subject of lynching, Manly opined that “our experiences among poor white people in the country teaches us that women of that race are not any more particular in the matter of clandestine meetings with colored men than the white men with the colored women.”  Manly’s public discussion of the taboo subject of interracial sex exposed the reality of sexual exploitation of black women by white men and challenged the myth of pure-white womanhood.

Forty-eight hours after Manly’s editorial ran, Waddell led 500 white men to the headquarters of the Daily Record on 7th Street.  The mob broke out windows and set the building on fire.  Manly and other high profile African Americans fled the city; however, at least 14 African Americans were slain that day.  An eyewitness later wrote that African Americans fled to the swamps, or hid in the African American cemetery at the edge of town.  When their criminal behavior resulted in neither Federal sanctions nor condemnation from the state, Waddell and his men formalized their control of Wilmington.  The posse forced the Republican members of the city council and the mayor to resign and Waddell assumed the mayoral seat.  Over the next two years, North Carolina passed the “grandfather clause,” as one in a series of laws designed to limit the voting rights of African Americans.