How Glorious Gloria Earned Her Name 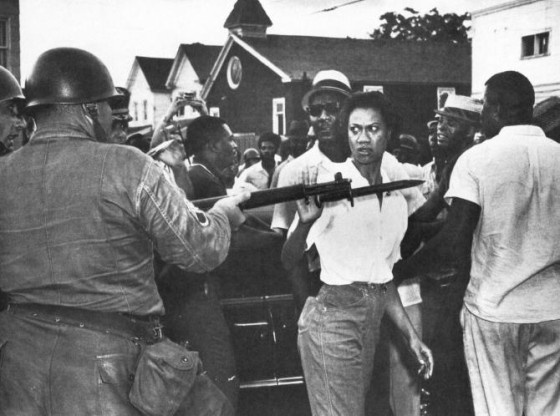 Gloria Richardson is one of the many women in Black history that have earned their stripes by being fearless in the face of danger. One of the most famous pictures of her is a black and white photo featuring Gloria pushing a bayonet out of her face. It has stood the test of time, and shows that even when the National Guard is called in, Gloria still stood for her rights.

Economic and racial equality in the 60’s was always an issue, and in Maryland there were certain roles for blacks of importance, but only if they stayed in their place. Gloria was blessed enough to come from a great family background, one that included a successful retail business in hardware. Her parents also held positions on the City Council board, Gloria definitely came from a well versed background. At the young age of 16 she worked her way through Howard University and graduated with a degree in sociology. But Cambridge would not recognize her GPA or background, choosing instead to focus on her skin color. Settling for the role of housewife, Gloria happily raised her kids but found her calling when her teenage daughter Donna joined the Student Nonviolent Coordinating Committee. During the civil rights movement the CNAC was the only SNCC group led by an adult, and Gloria was the perfect leader.

Gloria always had her activist roots with peace, choosing to fight for the equality of blacks not only in the workforce, but also equality overall. In 1963 the Cambridge Movement was at its peak, and was no longer about peace from both sides. Heightened tensions forced the Maryland National Guard to be called in to put the situation to rest. It led to some of the more infamous pictures from Gloria’s activist days, as she did not waver in the face of guns being pointed directly at her. On May 1964 Gloria had her final protest when controversial Alabama Governor George Wallace came to town. His visit didn’t go as well as planned, and a couple of months later the Civil Rights Act went into effect. This ended the National Guards occupation of Cambridge, and it was all due to Gloria holding the fort down for her people. She not only did her family proud, but her entire culture.

Richardson later remarried and moved to New York, officially retiring from activism. Every now and then over the years her name pops up, along with that famous picture that shows how strong of a woman she really is.