Millie and Christine McKoy were conjoined twins born into slavery, who later became one of the most notable “human oddities” attractions in the world. Billed as the “Two-Headed Girl” and also the “Two-Headed Nightingale,” the McKoy sisters delighted crowds with song and dance performances, as well as reading aloud poetry they wrote together. Although they were born under circumstances that could have defeated them, they managed to carve out an interesting life.

The sisters were born near the town of Whiteville, N.C. on July 11, 1851, to slave parents Jacob and Monemia, who were owned by blacksmith Jabez McKay.

Joined at the lower spine, the twins stood at an angle away from each other. Each sister had her own arms and limbs, 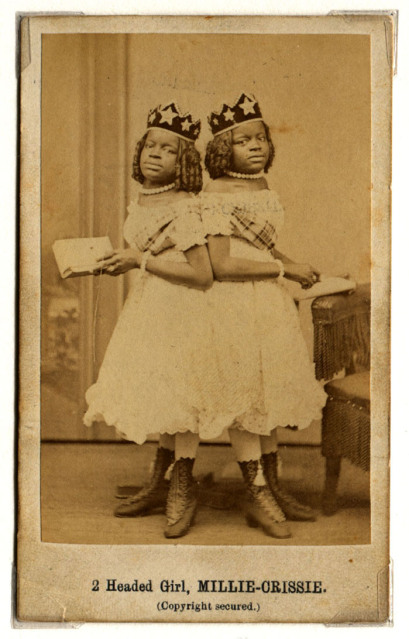 although they shared a pelvis. Their mother thought of them as one girl, using the name “Millie-Christine” to refer to both of them. Family members also referred to them as “Sister.”

McKay, aware of what the girls could command from traveling circuses and sideshows, sold the twins for $1,000 to an agent when they were just 10 months old. Before too long, they landed in the possession of merchant Joseph Pearson Smith. Smith hired the girls out on various road shows, giving them the billing of “The Carolina Twins.”

At just 3-years-old, they became a featured attraction in P.T. Barnum’s American Museum in New York. A showman who worked there kidnapped them and shipped them to England where they toured between 1854 and 1855. While there, the girls were subjected to embarrassing public examinations during the exhibitions in order to prove they were truly joined. This invasion of their privacy continued until they reached their teen years.

Smith, along with their mother, went to England in 1856 to retrieve the girls and sued to regain custody. Smith won and returned the girls to North Carolina where they rejoined their family on Smith’s farm. While the rest of the McKoy family worked as slaves, Smith managed the twins’ stage career.

From historical accounts, they were treated well and taught to read, write, and speak several languages by Smith’s wife.

When the Emancipation Proclamation ended slavery in 1863, the twins and their family remained with Smith.

They earned as much as $600 a week – a near fortune at the time and enough money to buy their father a farm in North Carolina. For the next three decades, Smith managed the McKoy twins’ career. They continued to draw huge crowds and increased their notoriety by publishing an autobiography in 1869.

Their fans included British royalty like Queen Victoria, who invited them to Buckingham Palace to perform in 1871. The twins rejoined P.T. Barnum’s traveling circus until their health began to fade. They retired to Columbus County in North Carolina and continued doing charity work for Black schools and churches in the South. They lived the rest of their lives out of the spotight.

When Millie died of tuberculosis in October 1912, doctors gave Christine morphine to help end her life quickly and painlessly. Still, some accounts say that Christine outlived her twin by as many as 17 hours.