Forman was born on October 4, 1928, in Chicago, Illinois. As an 11-month-old baby, he was sent to live with his grandmother on her farm in Marshall County, Mississippi. Forman often told the story of eating dirt as a child because during those days some people believed that the dirt held a nutritional value to the body; it was actually a food “staple” in his family. 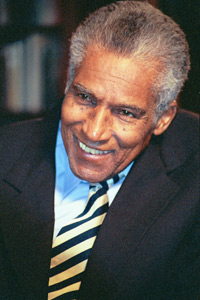 In his autobiography, he recalled being “hungry all the time.” His family had no outhouse and no electricity. They used leaves, newspapers, and corn cobs for toilet paper, and they used twigs off of trees as their toothbrushes. But despite all those things, Forman claims to have never questioned his poverty and did not understand it at the time. His Aunt Thelma once caught James reading a shopping catalog in the dark. Being a school teacher, his mother took an interest in accelerating James’ studying and tutored him at home.

After finishing his primary education, Forman enrolled in Englewood Technical Prep Academy. He started his high school career by taking vocational courses instead of the general, pre-college coursework. This led to a poor performance and eventually a suspension from school. He was sent to a continuation school, Washburne High. During this time, he also got a job as a paper roller at Cueno Press, and joined a gang known as the “Sixty-first Raiders.”

Around the age of, 14, James Forman, who had been going under the name of James Rufus, found out that his stepfather was not his real father by happening upon his own birth certificate. His real father was a cab driver with whom he had prior formed a relationship.

He was eventually able to raise enough money to attend the University of Southern California. During his second semester, he was stopped by police who said he fit the description of a man who had just committed a robbery. Forman denied any wrongdoing, but was apprehended anyway. He demanded a phone call and various “rights,” but instead was locked up for three days while being beaten and interrogated. This led to severe trauma, and he had to take part in therapy.

Forman was able to overcome his trauma and returned to Chicago in 1954. He enrolled at Roosevelt University that fall, became president of the student body, and graduated in three years. Forman then went to graduate school at Boston University, where he began to develop his first ideas behind a successful social movement.

In 1961, Forman joined and became the executive secretary of the newly-formed Student Nonviolent Coordinating Committee (SNCC). Three years later, Forman, expressing his frustration with the gradualist approach of some Civil Rights leaders, made one of his best-known quips: “If we can’t sit at the table of democracy, let’s knock the f*****g legs off!”

During the 1970s and 1980s, Forman completed graduate work at Cornell University in African and African-American Studies. In 1982, he received a Ph.D. from the Union of Experimental Colleges and Universities, in cooperation with the Institute for Policy Studies.

James Forman
« Previous PostSchooled by Youtube: Heads of Hate #13: Millard Fillmore Next Post »Poem: From Citizen: “Some Years There Exists a Wanting to Escape